The Magic of Minoa
Part 1 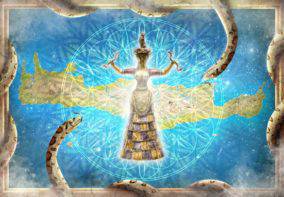 Minoa was perhaps the first and primary society ruled by women. This mysterious civilization thrived on the island of Crete and other Aegean islands, preceding ancient Greece. Minoans were a peaceful civilization; life was simple. Fish was the main source of sustenance as ancient Minoans were intimately connected to the sea. Fruits grew well and were favored, especially olives, figs, and pomegranates. They had four main palace sites all over Crete where export trade and spiritual and political ceremonies occured. Knossos was the main palace that contained the legendary labyrinth where the richest spiritual rituals were held, with only the elite allowed in attendance. Ancient Minoans put great importance upon introspection, respecting their existence, and enjoying sensual enjoyments of the sun, art, pottery, food, and ceremony.

The Snake Goddess is a vivid symbol of this culture and its connection with life force and primal energy. Snake has long been associated with healing, transition, and transformation. It is a bridge between worlds and carries profound spiritual wisdom. Snake sheds its skin as it grows. During its shedding, it is vulnerable, and its eyes cloud over for 3 to 4 days, but it re-emerges whole. The Snake Goddess of Minoa embodies the power of change, including spiritual and physical metamorphosis. All of us carry this same power – the ability to release and renew ourselves.

The Minoan Goddess in her butterfly form stands for transformation in all its stages, and celebrates rebirth inherent to the process. The butterfly’s cycle, from egg to caterpillar and chrysalis, into its delicate wings of endurance, mirrors our soul’s evolution, and the cycles of life. We all transform and shapeshift, becoming more of our true selves. Through periods of dissolving, as the caterpillar in the cocoon, we surrender our current form to alchemize in miraculous new ways. No part of us is lost, but the new version can look and feel drastically different. Just as we imagine it does for the butterfly emerging anew, on wings that will carry it across the sky, across the world.

It’s unclear why the Minoan period ended. Mystery beckons us forward, reminding us of our own mystery. Minoa reconnects us with our ability to transform, leaving only traces of evidence to what we once were. We, just as she, can change, appear, and disappear.

Minoa and its sacred symbols lead us to descend into the depths of the void, the center of ourselves, to come out renewed, enlightened, and whole. 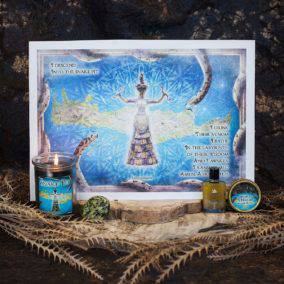 April’s Sabbatical set was inspired by the primal energy of the Minoan civilization. A matriarchal society that put peace, knowledge, and spirituality above anything else. This set is filled with tools intentionally chosen to stimulate this life force within you in accordance with the magic of Minoa. Snakes were protected in Minoa because they believed them to be the keepers of wisdom, as their venom allowed for stimulating visions of the Universe within and without. The colors, fragrances, and symbology present in this set will give you a taste, a glimpse, a feeling of the many layers of texture and richness that originate from ancient Minoa.

I chose resinoid benzoin, coriander, and Ho Wood – strong and powerful oils that are connected to the ancient world, as the keynotes for my Venom Perfume. Resinoid benzoin is traditionally used to purify and protect your sacred space. Benzoin opens you up to change and provides clarity before journeying. Coriander is used to call in passion and vitality. Ancient Greeks used coriander as an aphrodisiac and to promote weight loss. Its primary magical use serves all things related to love and fertility. Ho Wood is the oil of courage. It allows you to face the challenges of life with ease and awareness. Ho Wood also promotes psychic visions and vivid dreams. Anoint yourself with this potion to summon powerful snake medicine and begin your transformation.

My Snake Charm Incense blend includes blue lotus leaf, mugwort, wormwood, mullein leaf, fumitory herb, violet leaf, black storax, and is sprinkled with Venom oil. Blue lotus flower offers access to the gods and to secret wisdom – it is the nectar of the Divine. Mugwort is an herb of protection and divination. Working with mugwort facilitates altered states of consciousness – including astral projection and lucid dreaming. Named after the Greek goddess Artemis, wormwood is said to have been delivered to Chiron, the father of medicine, by the goddess herself. Wormwood is often used to treat digestive issues, and to make absinthe and other liquors. It is even said to possess hallucinogenic properties.

Mullein is a gentle herb used for protection against nightmares, evil spirits, and negativity. Fumitory is used to dispel negative energies, detoxify and balance the physical body, and cleanse the spirit. Besides being beautifully fragrant, violet is a powerhouse of healing. The leaves of this sacred flower are incredibly soothing, and evoke an incredible sense of serenity and peace. Black storax is used for meditation, deep sleep, calm, and relaxation. Burn my Snake Charm Incense to invoke a trance-like state, allowing you to access the Snake Goddess and her secrets.

Included in this set is one Snake Pit Candle, hand poured with black soy wax and dressed with a gold-green mica powder. Each candle also holds a leopardskin jasper chip stone and is anointed with my Venom Perfume. Light your candle with your intention to descend into the snake pit, asking the Snake Goddess to reveal her visions.

And finally, you will receive one tumbled serpentine, a potent kundalini stone. The name serpentine comes from the Greek word serpens, which means snake, and that’s how kundalini energy works. When it rises, it begins in your Root Chakra where it shakes and stirs, moving into your Sacral, your Solar Plexus, your Heart, your Throat, around your neck, and up to your Third Eye, winding winding winding, until it reaches your Crown and BAM. Transformation. The priestess in you will rise like the Phoenix. Hold this stone in meditation and feel your kundalini rising, awakening the serpent of life within.

Meditation with the Snake Goddess

Ancient Minoa was a peaceful civilization centered around the matriarchal goddess, who is best known as the Snake Goddess. Minoans regarded snakes as the keepers of wisdom because their venom stimulated hallucinations. These hallucinations, however, were not in vain – they allowed for visions and spiritual expansion. The venom itself, along with opium, was used to create a greater awareness. Unlike Christian tradition, snakes were sacred, as they were protectors and bearers of spiritual premonition. They were a symbol of power, and it is said that the symbol of the Snake Goddess transformed into goddess Athena’s protective shield.

Rituals were held in sacred sanctuaries and the palace of Knossos, which had light emanating from the abundant use of selenite in its architecture. Ritual objects were made of luxurious material such as gold and bronze. Jewelry and clothes with embroidered flowers were also found on ritual sites, along with polished basins (for the venom), figure eight shields (the ouroboros), small bowls decorated with shells, and stone libation tables. This tells us that the rituals in the palace were primarily reserved for the elite or those who served the elite. The rituals held by the public were carried out on mountain peaks and in caves, and their objects were made out of clay and adorned with the same delicate symbols. All ritual sites had symbols of the labyris (double-ax representing the Minoan Goddess in butterfly form) and stars to mark their location. Art, pottery, and dance were important to the Minoans and were always an integral part of their ceremonies.

In meditation, we will go back to the secret wisdom attained by these priestesses, and reclaim their power. What do they know? What mysteries do they hold? In order to do this, we must expand our minds with blessings from the earth and reclaim the power of snake medicine. We look for the vision beyond the illusion.

In honor of the Minoan priestesses, it is important that you wear a piece of gold or bronze, and a garment of crimson – the symbol of your blood. Position yourself to the west, and light two blue candles and drink tea infused with blue lotus and violet. Join your sisters as you close your eyes, envisioning negative attachments melting off of you. Imagine the powerful snake, gentle and captivating, absorbing your pain. As you drink, allow your mind to expand as you go further into a trance – into the deepest levels of your consciousness. Imagine, you are in a cave, or the palace of Knossos. Imagine the dance of the priestesses, and ask the Snake Goddess to translate these visions for you. What is she trying to tell you? What mystery does she hold? See yourself in this meditation, and see yourself transform with every sip of the venom. What do you see beyond this life? Hold on, be patient, allow her energy to flow through your veins. Become one with it.

Open your eyes, and keep her messages forever in your heart.