November Tarot – Judgement and The World

The Fool’s journey continues, and now we observe as he enjoys his rebirth and his deeper integration. He now feels absolved, and he has tapped into divine forgiveness, the root of all love. He feels compassion and understanding. He has touched upon his own pinnacle of divinity. The cards that symbolize this state of fulfillment are cards 20 and 21 of the Major Arcana: Judgement and The World. 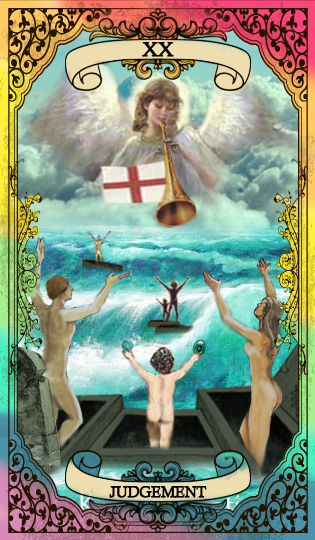 Judgement is a card of rebirth and absolution. The Fool has finally shed his ego self, allowing his own divine and beautiful self to manifest. He now understands that it is joy, rather than fear, which lies at life’s center. He understands that forgiveness begins within himself, so he can then be a conduit of forgiveness for others too. Free from ego, he no longer needs to judge others for their mistakes. This card heralds the birth of consciousness following the receptivity of The Moon and the new construction undertaken in The Sun. The small figure at the front center of the card represents the conscious fool. Notice he is framed by a female figure on the right and male figure on the left, who represent the divine balance of masculine and feminine needed for enlightenment. The true self has an androgynous nature. The emergence of consciousness is represented by the angel playing his trumpet above. Notice the clouds surrounding the angel to no effect. He blows his bannered trumpet regardless of the storm. On his banner we see a cross dividing the flag into four squares, which represent the four natural elements – earth, air, fire, and water.

My favorite symbolism of the Judgement card is that we see not only the three figures front and center, but many in the background as well, and all are rising, naked and exalting from their tombs. They are reborn and they are in ecstasy. A – an ecstasy that can only be attained through the Great Work, the master work of transmutation and self realization. Judgement is a card of renewal, rebirth, transformation, change of position, and eternal life. This is where The Fool is asked to make a judgement as to his life path. He is being called. Will he respond? The same goes for us when this card appears in a reading. When someone draws this card, they are being called. The difficulties arise when we cannot answer the call to which we are being summoned. It’s Judgement day, and only those who’ve done the work can answer the call of this card. If we freeze out of fear, we are transgressing back to illusions of The Moon. So in a way, this is a card of action. It asks The Fool (us) to now make the necessary decisions about the future. This is our moment where we can choose what is important to us. Which values will we cherish and which will we discard? When we can see with the clarity obtained on our journey, we can discard what no longer serves us. When this card appears, it may be asking you to do just that. Trust it. 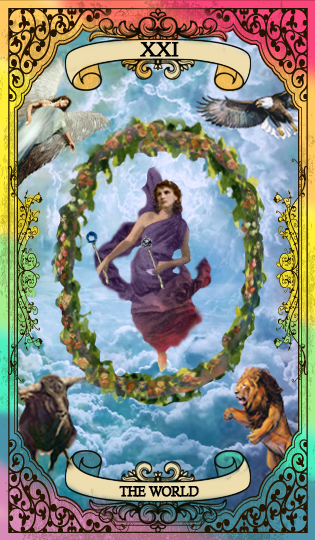 The World is a card of true fulfillment and integration. The Fool reenters the world with a more complete understanding of himself, which of course gives him an understanding of everything and everyone. Because when we understand our deepest nature, we understand everything. Now the Fool is living a life of meaning and promise. Anything is possible as he walks in his faith and enlightenment. He experiences magic, as we all do when we are aligned. He lives a life of service, which results in his own prosperous rewards in all that he undertakes. His accomplishments are many, as the world and universe conspire to see that his efforts are rewarded. This card is an ending of one journey to self-discovery, but remember, we never stop growing. There’s always another adventure and journey for further growth. And once again, we will come full circle as The Fool just setting out on a new journey towards even deeper understanding. It’s a continuous cycle within this life and over many incarnations. This is why The Fool represents nothing and everything, as does The World. Because this is a card of completion, success, and Highest Truth, it often appears later in readings since all these realizations take experience and deep work. When this card appears at the beginning of a life reading, it can represent an imprisonment of sorts when it appears in place of one’s early life. Usually it signifies a traumatic block from early on in life, even pre-birth, which is blocking the person being read. Ask yourself, how and why you/they are ‘stuck in their shell.’

The symbolism in this card is profound. First we see the oval surrounding the seemingly floating female being, which is thought to symbolize the egg and its powers of fertility and rebirth. In the Turba Philosophorum the egg is mentioned: “The art of alchemy is comparable to the egg in which four things can be found. The shell is the earth. The white is the water. The very fine membrane right beneath the shell is air….The yolk is fire” And what does the Major Arcana symbolize but our own alchemical transformation? The woman is depicted in a state of Divine Bliss. She holds two wands in her hands and she gazes off to the left – the direction of receptivity. The figure is female, but she also holds a certain bit of androgyny, which represents the union of principles and self.

The World is a call for us to be recognized in our own deepest reality and to accept self-realization. Of course this doesn’t come without work. This is the moment when we glimpse the suffering of the Collective and begin to live in service to humanity. This is what occurs when we are freed from self-destruction and ego. Finally on this card, we see four figures in each corner of the card. The angel, the eagle, the ox, and the lion, which connect to Christian tradition as the four evangelists. Here in the Major Arcana, they introduce us to understanding the four Suits – Pentacles, Swords, Wands, and Cups. The angel represents emotional perfection, holiness, and a full heart from a life of giving (Cups). The eagle symbolizes fulfillment of the mind, genius that can also be a void which cannot be adequately described in words (Swords). The lion depicts the culmination of desiring and creative energy (Wands). And the ox is symbolic of our corporeal center and our physical needs. To be whole and at one in self-realization, we need all four elements depicted in the four corners of the World.

Sex and gender are standard terms conflated by society to sustain the two rigid boxes of male and female. When…

In 2020, the world endured a series of global challenges ranging from the deadly pandemic to global civil rights movements,…