Dr. Athena Perrakis is the Founder of Sage Goddess, the world’s largest source of sacred tools and metaphysical education. Each week, Sage Goddess reaches over two million people across the globe, on every continent, and in more than 60 countries. READ MORE.

SHOP BY CRYSTAL OR STONE

These. I am SO excited to offer this special magic to you. This is one for my spiritual warriors! These stunning cacoxenite amethyst Dow generators are fresh from Brazil, from a newly discovered vein of cacoxenite amethyst. This is the first time I’ve ever had this to offer you, and I don’t know if I’ll find more. Usually only found in Uruguay, this new vein was just recently tapped into in Brazil, so these are freshly discovered, and they are simply enigmatic.

Have you heard of trans-channeler crystals? These cacoxenite amethyst Dow point generators are of this advanced, highly magical variety of carvings. Crystals themselves bear undeniable magic, but the shapes they’re carved into possess their very own power. The many gemstone formations we see are more than just pleasing to the eye – they conduct unique energetic frequencies. This is the first I’ve offered the Dow point shape and I am SO excited for it to take your magic to the next level.

From the top of a Dow point generator, you’ll see it has three seven-sided faces, each intersected by a triangle (a three-sided face). So the pattern goes 7-3-7-3-7-3, and there are six sides total wrapping around the body of the crystal. This specific design is what makes a Dow point. The ones I’m offering here are flat on the bottom, so they can be used like a generator and placed in your crystal grids. The images below show the points from a front view and a rear view: 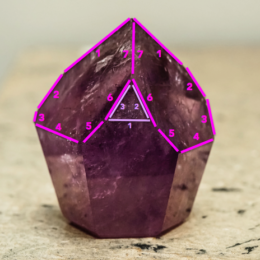 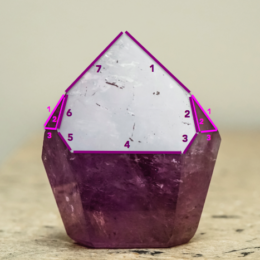 How to work with cacoxenite amethyst Dow generators

If you desire clarity, psychic visions, restful sleep, and vivid dreams, amethyst is the stone for you. It allows you to open yourself to receiving your own inherent wisdom. The Greek root of the word amethyst means “not intoxicated”, and that clear, sober feeling is exactly what this stone brings forth. It’s the perfect match for the cacoxenite rutilations seen in these spheres

Cacoxenite assists in spiritual evolution. Amethyst works to open your Crown and Third Eye Chakras while cacoxenite cleanses and purifies the spirit and the physical body, creating space for deeper contact and higher evolution. And because of the deep and powerful physical healing that cacoxenite carries, along with the generator shape, these are THE tool for healers of all practices. These are not for the faint-hearted – they truly inspire serious spiritual evolution. Generators are towers of energetic possibility.

Integrating the magic of seven and three is an intense and potent numerological union. The number seven represents connection with the Divine and alignment within the auric body. Seven permeates much of creation; there are seven days, seven chakras, seven prismatic colors, seven notes on the musical scale – and that’s only the beginning. Likewise, three is one of the most pervasive numbers in existence, found in symbols from almost every religion. It represents the Holy Trinity (father, son, and holy ghost); creation, preservation, and destruction; the three faces of the goddess (mother, maiden, and crone); past, present, and future; and so much more.

This listing is for one (1) cacoxenite amethyst Dow generator, of your choice in size. I have small, about 1.75-2.75″ in size, and medium, about 3-4″ in size. Yours will arrive lovingly wrapped, with a single white sage leaf for clearing energies, and a card describing the metaphysical properties of this stone.

Charge your tools with orgone energy on my custom Orgonite Charging Plate.

Anoint your crystals and gemstone jewelry with my SG Anointing Blend.

Want to learn more about perfume and aromatherapy? Join our private Facebook group at www.facebook.com/groups/SGPerfumery

Let us know what you think...

What others are saying

There are no contributions yet.

Continue as a Guest

Continue as a Guest