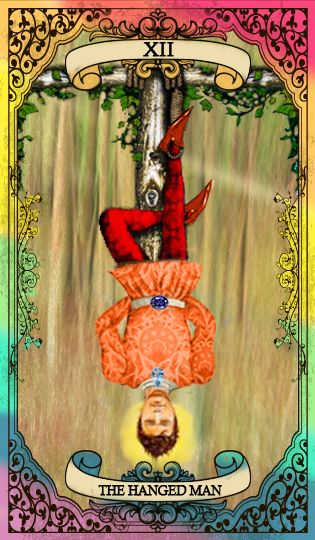 The Fool’s journey takes us ever deeper into the mystical realms of the esoteric and obscure. And there is perhaps no card which characterizes this phase more than card number 12 of the Major Arcana: The Hanged Man. In this card we see a man, suspended upside down from a tree by his ankle, dangling not with a face of fear or pain, but with one of calm understanding. This card represents a surrender; to the elements, to time, and to the Divine plan of the Universe. It can be an unsettling card because it represents a paradox. This is something that is true, but appears to contradict itself. The main lesson The Fool learns from his encounter with The Hanged Man is of choosing non-action. When we can learn to let go of our desires to control situations that we often have zero control over, we often end up growing, and gaining much more out of it. The Hanged Man has made the ultimate sacrifice, but he is peaceful and serene, because with it, he has gained spiritual enlightenment. This card also presents the lesson of stepping back and letting things unfold rather than forcing things to happen ourselves. When we most want to “do” something, is actually when we need to surrender. The paradox is, when we choose non-action over reaction, we often end up getting exactly what we need. The way the man on card 12 is portrayed is in the style of a pittura infamante, which shows the way traitors would be punished and shamed in medieval times in Italy. Twelve is a sacred number of balance; twelve months in a year, twelve signs of the zodiac. Some major themes of this card include waiting, surrendering control, open yourself up to vulnerability, reversing the way you look at a situation, centering yourself to find presence within each moment, and martyrdom. This image is also reminiscent of the myth of the great Norse god Odin, who suspended himself upside down on the World Tree for nine days in order to gain knowledge and wisdom. 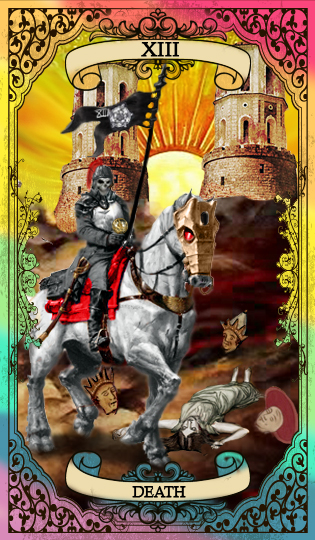 The next card of The Fool’s Journey is number 13: Death. Perhaps the most misunderstood and feared of the cards, Death rarely means an actual death is coming. It rather signifies that with loss, there is always a rebirth of some sort. When one thing in our lives comes to an end, a new beginning is often waiting to be found. Death can also represent going through changes, eliminating unnecessary things and energies from your life, and experiencing events which are inevitable and unavoidable. The Death card portrays a skeletal figure riding a white horse, carrying a black flag emblazoned with a white flower. The color symbolism here represents the duality of life and death, and also of the mystical rebirth and immortal energy of the flower. All life will eventually die, as represented by the various figures shown on the card that are literally dead on the ground. Death does not escape gender, age, or creed. The sun between the two towers represents the death and rebirth energy of the sun. At this stage in the Fool’s Journey, he is learning that everything must come to an end someday. But it is not finite, rather it is cyclical, and with the death of one circumstance, new opportunities are born. Another lesson The Fool learns with Death is that things will happen in life that are painful, but they are necessary for our growth. This is a Universal Law, for as we all know, life cannot exist without death, and joy without pain. The Death card can also mean it is time to free yourself from unhealthy attachments and behavior patterns. Ending pathways that are not for our Highest Good can feel like a terrible loss, and loss is inevitable. This card teaches us not only of the difficulties of letting go and grieving, but of the promise of deeper fulfillment when change and transition force us into a new phase of life. The number 13 is sacred, too, and very connected to goddess energy, as there are 13 moons in a year.

I hope you enjoyed our first six classes, and I look forward to chatting with each of you in our Facebook group until our next class on June 24th! Continue to explore your Rider-Waite deck, as well as the Tarot Ritual Kits, which you can either subscribe to and receive your tarot kit monthly, or get the new kit today. I can’t wait to see you in class.

Many blessings on your own journey to deeper wisdom.