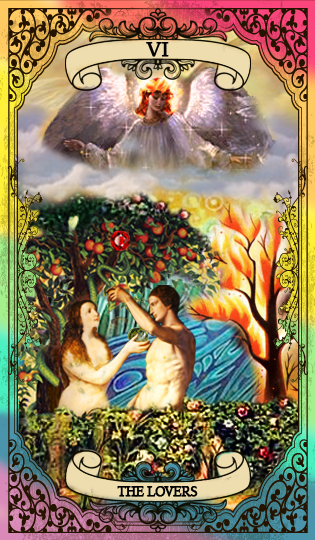 For April’s class, The Fool’s journey becomes one of deep learning and experience. At this point in the journey, The Fool is learning some valuable life lessons in love and in self-mastery. The sixth card of the Major Arcana is The Lovers. One of the most iconic cards of the entire deck, The Lovers is all about the partnership between two souls. Not only centered on love and sex, the card represents all aspects of two energies in divine union. How we relate to each other, the connections we make, being intimate, feeling attraction, establishing our own viewpoints, figuring out what we value, and dealing with temptation are some of the major themes The Lovers explore. The Rider Waite card depicts a man and a woman standing before each other and the Divine Blessing of the angel above them. The sun brings warmth to the union. Behind the woman there is a fruit tree with a snake, reminiscent of the biblical story of Adam and Eve in the Garden of Eden. And behind the man is a tree on fire, representing the flames of passion.  The Rider-Waite deck shows twelve flames on the tree for each sign of the zodiac and month of the year. The man is looking at the woman, who is looking at the angel, symbolizing the path that stems from a physical attraction all the way to spiritual enlightenment. The mountain behind them symbolizes a phallus, while the water represents femininity; symbolizing a balance between the two. Love is, of course, the most powerful force of all, and this card more often than not refers to the levels of consciousness one expands when colliding with it. Life experience is often gained the most through the deep bonds we make with others. Sometimes, the card refers to a situation in which we find ourselves facing a crossroads, and we have to choose between two outcomes. It can also represent finding our own paths in the world to know which outcome is best. 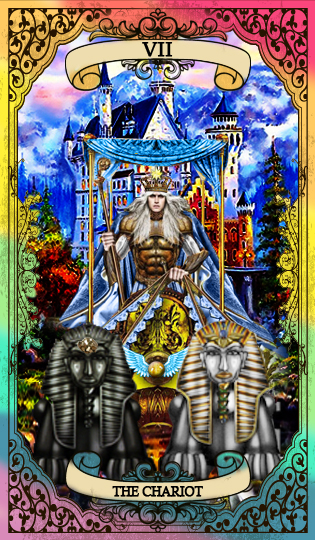 The seventh card and the next phase of The Fool’s journey is The Chariot. This card is all about how to use your ego in a healthy way, in order to achieve what you desire. We tap into the positive aspects of our ego-selves to be strong willed and assured. We know what we want and how to get it. In this stage of the journey The Fool is learning to check his ego here, which often creates more struggles and drama; instead he learns to be a master of self. This is the lesson of victory, of doing what it takes to succeed. Determination, concentration, possessing self-confidence, having control over your emotions, and establishing power is how The Chariot shows the way towards coming out on top. In this card we see a powerful masculine figure dressed in typical battle armor regalia, riding in gallantly at the front of his chariot. He holds a small scepter, and wears a gold crown with a star above his head. Stars adorn the drapery on his chariot, as well. The front of his chariot is ornamented with the ancient symbol of a winged disk. Two sphinxes, one white and one black, pull the chariot. Behind him is the landscape of a kingdom, with the tops of castles under a golden sky. This is a card of triumphant energy and sweeping movement, symbolizing not only the position of glorious victory, but also learning to live and appreciate the struggles of each battle, for they all have something to teach us.

I hope you enjoyed our first three classes, and I look forward to chatting with each of you in our Facebook group until our next class on April 29th! Continue to explore your Rider-Waite deck, as well as the Tarot Ritual Kits, which you can either subscribe to and receive your tarot kit monthly, or get the new kit today. I can’t wait to see you in class.