The Spiritual Side of the Tucson Gem and Mineral Show

Each year, people from around the world gather in Arizona for the largest domestic gem show – the Tucson Gem and Mineral Show.

This show began with humble roots in 1955, when local Arizona rockhounds decided to hold a ‘show’ at a local elementary school. Sixty-two years later, the show extends across the entire city of Tucson with a main show and more than 40 satellite shows; all told, the show brings in $120 million in revenue to the city each year.

While the show’s roots began with a small gathering of geologists interested in mining and expansion of the geological and gemological trades, today the show attracts a wide variety of spectators and collectors, many of whom are attracted to the spiritual and metaphysical sides of this once-traditional mineral showcase.

The spiritual side of this event

In this blog, I want to show you the spiritual side of the Tucson Gem and Mineral Show, and hope it inspires you to dig beneath the surface in your own life. Often there is much more to what we experience than we can ‘see’. 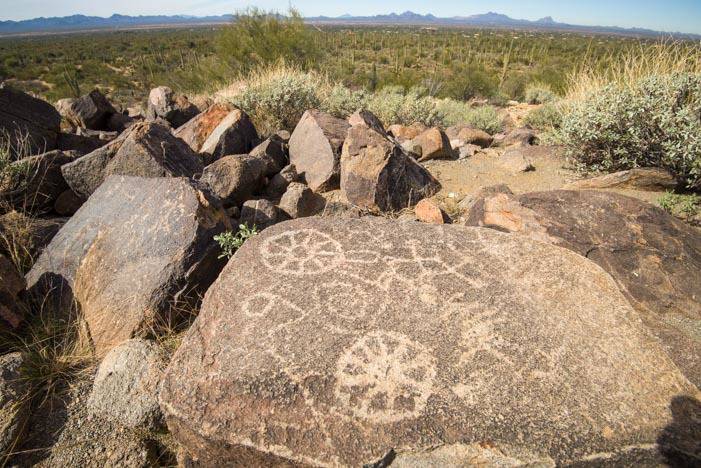 To begin, Tucson itself is a major energetic vortex in North America, sitting along an important ley line in the center of powerful mountain ranges. Tucson is an ancient caldera, where volcanic activity yielded to erosion and rock slides to create the dramatic landscape of color and texture. The energy of fire from ancient volcanic activity unites with the desert rain and wind plus the minerals in the land formation to create a balance of the four cardinal elements. Healers and shamans who travel to the Tucson Gem Show each year believe that the presence of the four elements in Tucson’s natural environment creates a strong energetic foundation, which is amplified by the force of the crystals and minerals brought to the show each February.

It’s quite an understatement to say there’s something special about crystals purchased at the Tucson Gem and Mineral Show!

You might ask why anyone would go to so much trouble to connect their crystals to each other and to the land. Metaphysical practitioners and crystal healers believe that crystals are powerful transmitters of ancient wisdom, receptors of stored energy and messages from millennia ago. They have much to teach us about our planet and our lives today, and the timing is critical: Our planet is undergoing an internal transformation that many empaths and intuitives can feel on a physical level. The encoded messages we interpret from our crystals can help us lead better, healthier, and more fulfilling lives. The major mining locations on this planet are all gridded to each other via ley lines and vortex points. These practitioners are reinforcing these lines and connections and amplifying the crystals’ own unique vibrational patterns so that they can easily transmit their wisdom to their owners.

Many who come to the Tucson Gem and Mineral Show spend early mornings or late afternoons taking guided tours into the desert for Sunrise Ceremonies or vision questing on reservation land. Some take their crystals out on these tours to charge and bless them. In quiet pockets of the show you’ll find shamanic drum makers playing sacred drums at sunset, or a native craftsman making a beautiful smudge fan for traditional smudging ceremony.

If you listen you’ll hear the gentle rhythmic beat of tribal drums, or you’ll smell the waft of healing Palo Santo smoke on the desert breeze. It’s all there but subtle, waiting for you to notice the spiritual side of the Tucson Gem Show.

I hope one day you will have the chance to experience the magic for yourself! In the meantime, I’ll continue to journey there each year, retrieving and activating the energies for you.

I was raised in the Christian tradition, but Easter isn’t only for Christians. Easter is a celebration of rebirth, and…

What I love about our community is the way we blend practices for beginners, with wisdom and exercises to support…