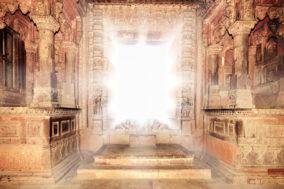 Welcome to the vibrant culture of India, a civilization that is alive with ancient traditions. India’s long history is steeped in oral traditions, which have remained unbroken for over ten thousand years. India is home to innumerable subcultures and spiritual orders. There, daily rituals honor the Celestial Father and Mother, respectively embodied by the Sun and the Moon. In India, the energetic essence of the Divine Masculine and Divine Feminine are represented by a seemingly endless array of gods, goddesses, and animal deities. For the most part, India’s pantheon of gods, goddesses, and animal deities are metaphoric aspects of self-realization. Spiritual enlightenment is the heart of India, and the practices to achieve it compose its sturdy backbone.

The Vedas are ancient texts written by illuminated sages of the area once known as the Indus Valley, which is now the Tibetan Ridge, northwest India, Afghanistan and Pakistan. From the Vedas, the sciences of astronomy, astrology, Ayurveda, and yoga arise. The Vedas are terse and esoteric, making it necessary for a master teacher to guide a spiritual initiate through the formulaic process that results in self-realization. These lineages of spiritual teachings have given rise to the major religions of the east, including Buddhism, Hinduism, Jainism, and yogic traditions.

Once, the Indian subcontinent was broadly divided into northern and southern regions, each an assemblage of provinces, chiefdoms, and kingdoms. Countless languages, religions, and cultural identifications spread across this vast land. It was not until colonial forces subdued the region that borders were drawn, and its spiritually inclined inhabitants became subjected to authoritative rule under the unification of India. Despite nearly six hundred years of subjugation, India has remained rich in a multitude of cultural identities, spiritual practices, and ancient mystery. Now a sovereign country, India remains the gateway to the sensual expression of spiritual awakening. 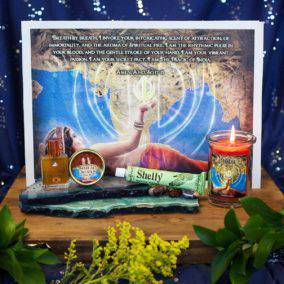 This month, your Sabbatical set was inspired by the creational force of the universe, known as Shakti in India. This set is filled with tools intentionally chosen to stimulate this creational force within you in accordance to the magic of India. Sensuality is inherent to India, both in ancient times and today. This set was created to stimulate your inner-creational forces, and to provide you with tools to further you along your path of self-realization. The colors, fragrances, and symbology present in this set will give you a taste, a glimpse, a feeling of many layers of texture and richness that originate from the Indian subcontinent.

I chose sandalwood, rose attar, and saffron concentrate – the oils of sensuality and enlightenment, as key notes for the candle and perfume. The sacred incense blend includes a sandalwood base for purification, expansion, and self-realization. Natural hessonite garnet, a Shiva Lingam, and sunset sodalite make up the Sensual Creation stone set, and it will stimulate your creative drive, and attract abundance, prosperity, and passion. The Powdered Incense Blend includes a cowrie shell in the tin. The cowrie is symbolic of the Great Mother Yoni, the Kali-Cunti. Its translation derives from “Kauri,” the brilliant creational energy of Shakti. Included in this set is one henna cone, made of pure henna and natural oils. We will use the henna cone together during our Magical Sabbatical class, and you can share your designs on social media! This set will connect you with the sensuality of India, a culture rich with ancient traditions. These ancient traditions are relevant today, providing us with tangible steps toward self-realization.

Your senses are heightened, and the harmonious movement of the masses clatter like crashing currents of the ocean. Music flows through the city, mingling with voices that echo off the city walls. Colors rush by in streaks of orange, red, and gold. The air is heavy with spicy fragrances so thick you can practically taste them. In this saturation of sight, sound, smell, and touch, you are standing still with your eyes closed; present, yet muted. Do you feel the cacophony of life? Do you feel the rush of a million heartbeats surrounding you? Open your eyes.

You’re in the midst of a bustling marketplace bazaar, and both sides of this timeworn alley are overflowing with lines of vendors tented under bright fabrics. You pass baskets of spice, stacks of leafy vegetables, and tropical fruit. It’s inviting, and exciting, but you still continue to weave through a stream of shoppers until you make your way to an unlikely pocket of the city. The decor is modest, and you notice a luminous man sitting cross legged on the floor near a low burning fire. His bright, open gaze catches yours and you immediately feel a sense of peace and familiar warmth in his approving stare.

Without saying a word, you sit humbly and cross legged near the sacred fire, as the enlightened man bows his head in a gesture of acceptance. You sit embraced in his bond, as the monsoon of the crowd passes you by.

His skin is covered in ash from the holy fire, his body is sinewy, and lean as a jungle cat. He reaches out to his mound of holy ash, then swipes the three white lines of Shiva across your forehead, and initiates you with a thumb-print dot of vermillion powder between your brows. Your guide closes his eyes, and after observing a sense of serenity encompassing his being, you follow his lead. You breathe in deeply, positioning yourself taller and straighter with each inhale. Each new breath feels like a renewal of life, and with gentle concentration, you notice your exhale connecting you deeper and deeper into this present space. Do you feel that? It’s your awareness. Your center.

It is said that a wanderer will travel the world looking for what the true seeker has found within. Without having to physically travel the broad subcontinent of India, without having to delve into its multiplicity of mysteries, miracles, and myths, you have already found the Temple of the Divine. It is in you. It is here, fully accessible with your eyes closed, and your breath full, that you truly connect with the frequency of Source.The true origin of observation begins in the breath, and true breath begins in the observation. Within each of us is the spirit of the initiate, the wanderer, the guide. All are here now, as time, civilization, and space collapse at our feet.

The legacy of traditional Vedic teaching spans back nearly ten thousand years, and is living today in vibrant, unbroken continuity. The basic concept behind these ancient teachings is that the body, our living temple, must be finely tuned for high frequency energy transmission. Legend has it that an average man would instantly die if he laid his eyes upon the pure energy of the Divine. In order to prepare for spiritual development, physical daily practices are needed to increase the quality of our state-of-being. Our path to igniting the spiritual fire starts here, in this physical reality. The most tangible and accessible way to tap into spirit is through the body.

The truth is, our perception of self is muddled by the senses, the mind, and elements that make up our environment. Our internal channels cannot conduct the high frequency vibrations of cosmic intelligence from this disconnected, unaware state of being. Though universal forces of energy are present in all forms of creation, both internally and externally, these subtle, yet powerful forces cannot be perceived without developing the senses to do so. In India, through ancient wisdom of the sages, we are given the tools to develop our spiritual body and light of prescription.

Energy Channels and the Kundalini

Our bodies are composed of three major energy channels, and along the primary channel that runs parallel the spine, there are several points of energetic intersection, called the Chakras. With each illuminated breath we take, we direct the flow of prana, life-force, along this primary channel of energy, and through each of the Chakra centers. Traditional Vedic practices can teach us to use our inner-focus and pure life-energy to rouse a great energetic power lies sleeping within each of us. The magic of India has the power to ignite this latent, creative force within.

The yogis of India call this force Kundalini, and associate it with a snake coiled at the base of the spine. It is a metaphor for untapped energy, and the spiralling, self-generating, regenerative powers associated with the Great Serpent. It is believed that when the body is prepared, and the energy channels are primed, the great serpent energy of the Kundalini uncoils, and surges up the spine in a undulating expression of pure, creative, universal force. The waking of the Kundalini often involves physical expressions of ecstasy, unbridled rhythmic pulsations, and the onslot of cosmic waves of orgasmic universal oneness.