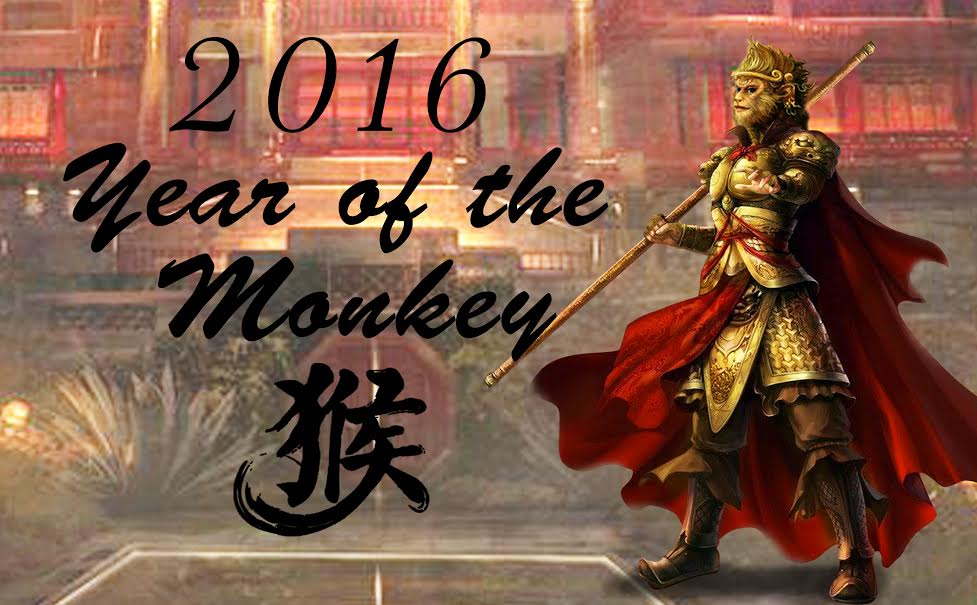 Join me in Greeting the Year of the Fire Monkey

Celebrated at the turn of the traditional lunisolar calendar, the Lunar New Year, commonly known as Chinese New Year, is celebrated at the arrival of the second New Moon of the year by the Gregorian calendar, between January 21st and February 20th. As many of us know, the lunisolar calendar is governed by the sun and moon, naturally carrying with it many metaphysical implications for us here on Earth. This significant lunar-powered day is steeped in centuries of tradition, myth, and wisdom. The modern Chinese language name for Chinese New Year literally translates into “spring festival” – a time-honored celebration of ancestors and deities, and an acknowledgement of the coming of spring.

This is a time for cleansing and clearing of our altars, spaces, and homes from the energy of the last year. In Buddhist or Taoist  practice, home altars and statues are cleaned thoroughly, and decorations used to adorn altars over the past year are taken down and burned a week before the new year starts. They are replaced with new decorations and sweet offerings to usher in fresh energies of good fortune from the deities and spirits. Prayers of thanks are given by Buddhists, Christians, and Taoists alike for the safe passing of the previous year, while Confucianists take time to honor their ancestors with remembrance, a time-honored ritual that I deeply appreciate.

The Chinese Shēngxiào, what we know as Chinese zodiac, literally means “birth likeness”. Our Gregorian calendar is slightly off from the lunisolar calendar used in many Eastern traditions and cultures since ancient times. This gives us an entirely different and powerful zodiac (which, by the way, means “animal wheel” in Greek etymology) made up of twelve different animals, assigned to years rather than months, as our Western zodiac does. Each year falls under a powerful animal sign. February 8th, 2016, with the arrival of the New Moon, ushers in a Year of the Monkey.

Another beautiful part of this zodiac is the presence of the influences of the elements of fire, earth, water, wood, and metal. The elements are assigned to years based on the number a year ends in; thus we now greet the element of fire, which governs years ending in 6 or 7. Each animal also has its own assigned fixed element, and monkey carries a fixed element of metal.

Remember my fellow stargazers, if you want to calculate your Chinese zodiac, if your birthday falls before the arrival of the New Moon in your birth year, then you fall under the previous year on our Gregorian calendar. Here’s an example – those born between January 25th,1979 to February 15th, 1980 fall under Year of the Goat, with Yin earth element. Those who arrived before January 25th 1979 would fall under the 1978 zodiac. With so many elements and energies here, we can dive deep into this zodiac just as we can with western zodiac. Curious about astrology? Come see my astrology class here.

What Fire Monkey may bring this year

Chinese zodiac is heavily governed by Feng Shui principles and based on ancient properties of Yin and Yang. This Year of the Fire Monkey is symbolized by two elements – we have Yang fire for 2016 sitting on top of Monkey’s fixed element, metal. Yang fire is a masculine energy which represents explosive, quick-tempered eruptions. This is calmed by the energy of Monkey, a metal element representing the west and the setting sun, so the Yang fire will be comparatively mild under the metallic influence of Monkey.

As we acknowledge the playful and curious nature of Monkey, there will be no better time than this moment to shake things up, and create new space for changes and fresh energy to flow into your life.

Watch for conflicts as tempers and heat may flare this year, while metal and fire clash. In the event of personal conflicts, keep in mind that they can be more easily resolved with compromise and concessions when the heat cools down after sunset. Yang fire embodies the energy of the sun, bringing optimism and warmth. So while we may see eruptive, fiery conflicts and natural disasters, it will be easier to reach agreements and treaties to resolve conflicts and struggles.

I will partake in cleansing and purifying rituals for my personal space and altar with a cleansing power candle that I am offering in a ritual set for your personal new year use. I also suggest clearing your space with sage and Palo Santo smudge sticks, and using healing gems to purify your spaces and altars. Rainbow quartz intention clusters activate your chakras and bring a brand new energy to your altar or ritual space.

Join me in greeting fire with fire, burning away the old energies of the year past, thanking them as we send them on their journey. I love the ritual of clearing my altar of last year’s energy and items to create space for the new that approaches. I suggest smudging your altar space and items you may wish to return to your altar for use in the new year. Welcome in a new gemstone with attraction properties, or a sweet smelling anointing oil, to attract the good-luck spirits as the ancients once did, with offerings of sweets and candies.

With love and fire blessings,