Welcome to the vibrant culture of India, a civilization that is alive with ancient traditions. India’s long history is steeped in oral traditions, which have remained unbroken for over ten thousand years. India is home to innumerable subcultures and spiritual orders. There, daily rituals honor the Celestial Father and Mother, respectively embodied by the Sun and the Moon. In India, the energetic essence of the Divine Masculine and Divine Feminine are represented by a seemingly endless array of gods, goddess, and animal deities. For the most part, India’s pantheon of gods, goddesses, and animal deities are metaphoric aspects of self-realization. Spiritual enlightenment is the heart of India, and the practices to achieve it compose its sturdy backbone. 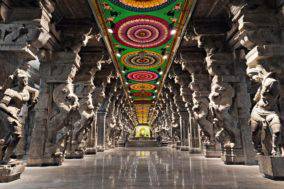 The Vedas are ancient texts written by illuminated sages of what was once known as the Indus Valley, now the Tibetan Ridge, northwest India, Afghanistan and Pakistan. From the Vedas, the sciences of astronomy, astrology, Ayurveda, and yoga arise. The Vedas are terse and esoteric, making it necessary for a master teacher to guide a spiritual initiate through the formulaic process that results in self-realization. These lineages of spiritual teachings have given rise to the major religions of the east, including Buddhism, Hinduism, Jainism, and yogic traditions.

Once, the Indian subcontinent was broadly divided into northern and southern regions, each an assemblage of provinces, chiefdoms, and kingdoms. Countless languages, religions, and cultural identifications spread across this vast land. It was not until colonial forces subdued the region that borders were drawn, and its spiritually inclined inhabitants became subjected to authoritative rule under the unification of India. Despite nearly six hundred years of subjugation, India has remained rich in a multitude of cultural identities, spiritual practices, and ancient mystery. Now a sovereign country, India is the gateway to the sensual expression of spiritual awakening.

The sages of ancient India developed the science of Vedic astrology, which is the forerunner of our own astrological practices of today. These enlightened sages also recognized the vibrational powers of gemstones. Certain gemstones, in particular, harmonize with planetary frequencies. These gemstones are known as Vedic Astrological Gemstones, in Sanskrit, the Navaratna. Planets influence our reality on a multitude of levels. The stones of the Navaratna can help us work with, and balance planetary influences, while providing beneficial and strengthening positive vibrations.

Vedic Astrological Gemstones attune the energy centers of the seven chakras, and stimulate the energy of the kundalini, the creative force that mostly lays dormant at the base of the spine. In this way, these powerful gemstones balance our internal energy forces, which then aligns our mental, emotional, and physical body, in a very gentle and holistic way. On a deeper level, Vedic Astrological Gemstones offer a uniquely powerful way to mitigate the effects of past wrong action. Sometimes this is called negative karma. Absorbing the beneficial and strengthening radiation from the Navaratna can significantly enhance our physical vibration, which fortifies our desire and commitment to live in accordance of our Highest Good.

The Vedic Astrological Gemstones included in this month’s Gem Wise set represent the four cardinal directions, and the sun at the center. These special chosen stones can assist us when conventional solutions have failed us. By aligning the energetic frequencies of these gemstones, we can to tap into the beneficial qualities of planetary influence in the realms of business affairs, relationships, physical health, and spiritual wellness.

The correspondences for the gems in this month’s set are based on Vedic tradition, and may vary from those you are accustomed to. In blending Eastern and Western practices, we can appreciate a greater wholeness and diversity in perspective and meaning. Immerse yourself in the teachings of India and notice how your heart and spirit respond. You may find yourself in a mysterious state of remembrance and resonance. 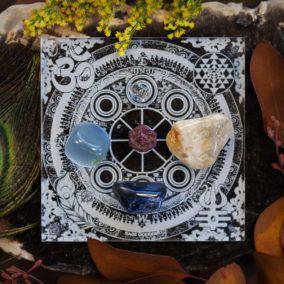 Ruby is a precious gemstone that has been traditionally worn by kings and royalty for ages. Its mystical powers are the stuff that legends are made of. Rubies are a revered gemstone to the Hindus of India. According to Vedic Astrology, Ruby is the gemstone of the Sun, the King of the Zodiac. Sun is the ultimate nurturer, the giver of vital energy, and the soul of the cosmic body. Ruby is one of the rare colored gemstones that is more valuable than diamonds.

Ruby helps us to overcome timidity and insecurity. If you have a hard time making yourself heard, this is a fantastic gemstone to increase your self-confidence. Ruby helps to bring about what the heart most desires. Its natural red color is associated with passion and love, and to receive a ruby as a gift is a mark of undying, eternal love. One of ruby’s most notable effects is that it helps to dissolve mental confusion, giving an alert, sharp and focused eye to its user. It will help you set goals and wor projects through to conclusion. Another well known benefit of ruby is its ability to progress self-awareness, and the realization of truth. These attributes contribute to steady spiritual development.

Blue sapphire is the Vedic gemstone of Saturn. Saturn is a karmic planet. It is said that Saturn periods can bring great abundance, or misfortune to our lives. In fact, our Saturn cycle may be the defining phase of our lifetime. Blue sapphire is an incredibly fast acting gemstone. Its impact can be felt instantaneously. It has the power to attract wealth, good luck, opportunity, and career enhancements within one lunar cycle of using it.

Blue sapphire has a direct impact on finances. It gives a positive boost to your wealth level, and has the potential to bless you with multiple income streams, should you feel so inclined to pursue the opportunities that will naturally come your way. On a career level, blue sapphire will help you to establish a name for yourself, fame if you desire it, and a formidable reputation. Blue sapphire has been known to bring miraculous results, especially during Saturn Transits, such as a boost of metabolism, and an increase of physical vitality.

Red coral is the Navaratna stone for Mars. Red coral is expensive and very difficult to source. In the spirit of red coral, we are working with coral in fossilized form. Fossilized coral is a natural gemstone formed by ancient coral through a process that can take greater than twenty million years to complete. Also called “agatized coral”, fossilized coral is preserved skeletons of marine animals. It has become what it is over time, a tangible testament to evolution. This timeless stone carries ancient wisdom, endurance, and grace. It magically heightens our senses to find alternatives to our experiences of “suffering”, and brings greater clarity in understanding why we suffer – how it helps us grow, and reshapes us through vulnerability, into more of our natural beauty.

It comes as no surprise that fossilized coral, a product of change itself, is known for activating, supporting, stabilizing, and helping to integrate change on many levels. It is particularly useful in bringing about positive change through repatterning. It liberates old karmic patterns, especially associated with family and relationships. Even emotional trauma carried through generations can be released with the help of this ancient stone. Fossilized coral helps us accept the changes in our bodies that naturally happen over time. By keeping us grounded, fossilized coral steadies the pace at which we shift, ensuring we sustain the entire process with more ease. It reminds us that what seems frozen in time can transform, and is actually transforming.

Cat’s eye gemstone has long enchanted Vedic astrological sages. Its striking appearance, distinctly marked by its chatoyancy, is known only secondly to its remarkable metaphysical powers. According to Vedic astrology, cat’s eye is the gemstone of Planet Ketu, or the South Node of the Moon. It is a gemstone with intense planetary energy and fast acting results. On a financial level, cat’s eye can help restore lost wealth, and has the capacity to reinvigorate or restore a failing business. Cat’s eye is a favorite gem of gamblers. It is said to bring luck to speculative endeavors and games of chance. This is a gem for risk takers and adventurers.

Cat’s eye can be used as a talisman of physic protection, and has the power to ward off the evil eye. It can be used to relieve mental anxiety caused by suppressing your true desires, and it helps to dissolve stress. Cat’s eye can release unnamed fears and traumas that cripple us, and cause us to hesitate from taking positive steps to empower ourselves. It is believed that cat’s eye helps to restore the physical body that has been damaged by abuse. This can be abuse of any kind, from unhealthy habits to disease, depression, and so forth. Cat’s eye can help restore a lost appetite, and has been used to support the treatment of anorexia. It is a great gemstone for the elderly, as cat eye’s is believed to restore memory, while bringing greater awareness to the immediate moment.

Diamond is the Navaratna stone for Venus. Diamonds are very expensive. In the spirit of diamond, we are working with Herkimer diamond. In the metaphysical community, Herkimer diamonds are prized as the most powerful quartz crystals in the world. They are said to amplify spiritual energy, and can enhance the energy of other stones. Herkimer diamonds are believed to have a kind of “crystal memory”, which gives them the ability to retain information that can be retrieved at a later date, and they can be “programmed” with feelings of love, healing, and well-being for others to draw from. 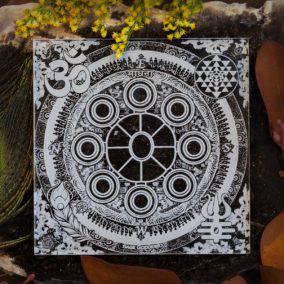 When all of the Vedic Astrological Gemstones are arranged in a specific grid, called the Navaratna, they bring the benefits of all the planetary gemstones simultaneously. The cosmic design of the Navaratna places a ruby, representing the Sun, in the center, surrounded by the other eight planetary gems. East features at the top of the Navaratna, in association with the rising sun and the energy of new beginnings.

The four symbols in the corners of the grid display the Om symbol, the Sri Vidya Yantra, Shiva’s trident, and a peacock feather. The Om symbol, also expressed as “AUM”, represents the primordial vibration of the universe in balance. The Sri Vidya Yantra is an expression of sacred geometry. It is a reflection of the three-dimensional frequency created by certain phonetic vibrations. An example of high frequency phonetic vibrations occurs with the chanting of “OM.” Shiva’s trident is symbolic of the three-fold manifestation of reality, the physical, the conceptual, and spirit. The three vertical lines within this symbol can be seen on the foreheads of India’s spiritual renunciates, along with a red dot in the center, the center of spiritual sight. Lastly, the peacock feather is an auspicious symbol in India. It is a representation of Lord Krishna, an incarnation of Vishnu. The peacock is the national bird of India, and a symbol of wealth and prosperity.

Framing the Navaratna is the Kalachakra, the Great Wheel of Time. This complex and esoteric form represents the whole of creation. The unified stillness of cosmos dwells within the Kalachakra, as does each expressed, dynamic fluctuation that has ever been, or has yet to be.