Are you ready to raise the vibration of Love? Here’s your AroLove bonus class where I teach you about the five main ingredients in the AroLove essential oil blend, designed to aid you in experiencing the highest frequency of love. If you are feeling called to work with AroLove, you can find it HERE. 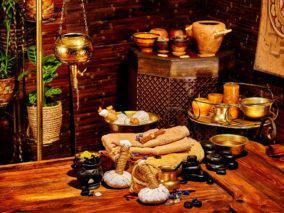 Welcome to the vibrant culture of India, a civilization that is alive with ancient traditions. India’s long history is steeped in oral traditions, which have remained unbroken for over ten thousand years. India is home to innumerable subcultures and spiritual orders. There, daily rituals honor the Celestial Father and Mother, respectively embodied by the Sun and the Moon. In India, the energetic essence of the Divine Masculine and Divine Feminine are represented by a seemingly endless array of gods, goddess, and animal deities. For the most part, India’s pantheon of gods, goddesses, and animal deities are metaphoric aspects of self-realization. Spiritual enlightenment is the heart of India, and the practices to achieve it compose its sturdy backbone.

The Vedas are ancient texts written by illuminated sages of what was once known as the Indus Valley, now the Tibetan Ridge, northwest India, Afghanistan and Pakistan. From the Vedas, the sciences of astronomy, astrology, Ayurveda, and yoga arise. The Vedas are terse and esoteric, making it necessary for a master teacher to guide a spiritual initiate through the formulaic process that results in self-realization. These lineages of spiritual teachings have given rise to the major religions of the east, including Buddhism, Hinduism, Jainism, and yogic traditions.

Once, the Indian subcontinent was broadly divided into northern and southern regions, each an assemblage of provinces, chiefdoms, and kingdoms. Countless languages, religions, and cultural identifications spread across this vast land. It was not until colonial forces subdued the region that borders were drawn, and its spiritually inclined inhabitants became subjected to authoritative rule under the unification of India. Despite nearly six hundred years of subjugation, India has remained rich in a multitude of cultural identities, spiritual practices, and ancient mystery. Now a sovereign country, India is the gateway to the sensual expression of spiritual awakening.

This month, your AroMagic set contains Tools for Systemic Balance, an assortment of oils and herbs that will introduce you to the basic concepts of Ayurveda, the Indian system of holistic healing. These herbs and oils are a legendary part of Hindu culture, and widely used across the world today. 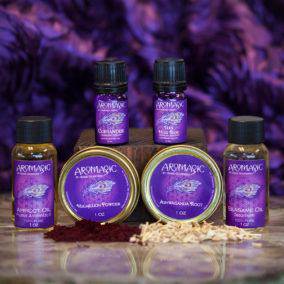 Ayurveda is the Indian system of holistic healing. Consider Ayurveda the sister science to yoga. Ayurvedic practices encourage conscious living. This science gives us a way of understanding our individual natures, and helps us to see how daily life influences your body and digestion, your mind and quality of thoughts, and ultimately, your spiritual development. Ayurveda teaches us that all of these aspects of ourselves are affected by the rhythms of nature, and changes in our day-to-day routine. Using herbs and oils that correspond with your unique nature and lifestyle can begin to balance your entire being.

Tulsi, known as Holy Basil in the West, is worshipped by millions of people throughout India. It is believed that this herb is the embodiment of Lakshmi, the Hindu goddess of wealth, love, and prosperity. And the plant certainly lives up to its sacred status throughout India, and much of the world. Possessing a wide range of health and spiritual benefits, Holy Basil has become a legendary part of Hindu culture over the last five thousand years. Tulsi adorns houses and temples throughout the country, its revered names are “The Elixir of Life” and “Mother Medicine of Nature.”

Coriander has been used as an herb and medicinal plant since ancient times. Across many cultures, coriander has been used for the treatment of digestive disorders like stomach aches, indigestion, and nausea. In fact, Coriander is referenced in the Old Testament, where it is compared to nutrition-rich manna, the food of the heavens.

Ashwagandha is one of Ayurveda’s best kept secrets for over 6000 years. Considered the King of the Herbal Kingdom, ashwagandha is an adaptogen, that is, an herb that can be used to strengthen the entire system. The ashwaganda root has a very particular strong, earthy odor that gave the plant its name. From the Sanskrit word ashwagandha, ashwa meaning horse and gandha meaning smell. This can be interpreted to mean the essence of the horse, a nod to the plant’s ability to provide the strength and stamina of a horse to those who take it. It has a long established reputation as an aphrodisiac herb that increases the sexual health of both men and women. Numerous ‘herbal viagra’ include ashwagandha as a prime ingredient.

Kumkum is not just a vermilion powder – it has a deep significance. Kumkum is usually applied on the forehead as a blessing on the Third Eye – the home of Brahma, believed to be the abode of the soul, the connection to the universal mind, the intuition, and all senses. It is believed that kumkum removes both stress and anxiety. Married Indian women place it on the part of their hair to honor their husbands, displaying their commitment. The red powder indicates the new social position of Indian brides and their connection with the groom’s family.