The Magic of Minoa
Part 1

Minoa was perhaps the first and primary society ruled by women. This mysterious civilization thrived on the island of Crete and other Aegean islands, preceding ancient Greece. Minoans were a peaceful civilization; life was simple. Fish was the main source of sustenance as ancient Minoans were intimately connected to the sea. Fruits grew well and were favored, especially olives, figs, and pomegranates. They had four main palace sites all over Crete where export trade and spiritual and political ceremonies occured. Knossos was the main palace that contained the legendary labyrinth where the richest spiritual rituals were held, with only the elite allowed in attendance. Ancient Minoans put great importance upon introspection, respecting their existence, and enjoying sensual enjoyments of the sun, art, pottery, food, and ceremony.

The Snake Goddess is a vivid symbol of this culture and its connection with life force and primal energy. Snake has long been associated with healing, transition, and transformation. It is a bridge between worlds and carries profound spiritual wisdom. Snake sheds its skin as it grows. During its shedding, it is vulnerable, and its eyes cloud over for 3 to 4 days, but it re-emerges whole. The Snake Goddess of Minoa embodies the power of change, including spiritual and physical metamorphosis. All of us carry this same power – the ability to release and renew ourselves.

The Minoan Goddess in her butterfly form stands for transformation in all its stages, and celebrates rebirth inherent to the process. The butterfly’s cycle, from egg to caterpillar and chrysalis, into its delicate wings of endurance, mirrors our soul’s evolution, and the cycles of life. We all transform and shapeshift, becoming more of our true selves. Through periods of dissolving, as the caterpillar in the cocoon, we surrender our current form to alchemize in miraculous new ways. No part of us is lost, but the new version can look and feel drastically different. Just as we imagine it does for the butterfly emerging anew, on wings that will carry it across the sky, across the world.

It’s unclear why the Minoan period ended. Mystery beckons us forward, reminding us of our own mystery. Minoa reconnects us with our ability to transform, leaving only traces of evidence to what we once were. We, just as she, can change, appear, and disappear.

Minoa, and its sacred symbols lead us to descend into the depths of the void, the center of ourselves, to come out renewed, enlightened, and whole. 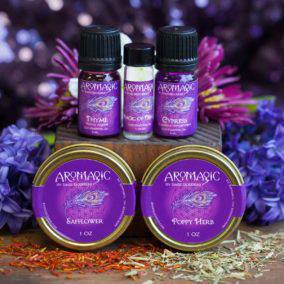 Herbs and Oils for the Original Priestess

The Minoan civilization was a powerful matriarchy that thrived on the island of Crete and on other Aegean islands, preceding ancient Greece. The herbs and oils we cover in this class will grant you access to the incredible magic that the Minoan civilization cultivated so long ago. These are all native plants from the region that were used in various forms, rituals, and grew in abundance. Allow them to  guide you to channel the Divine Feminine magic of this lost land, and awaken your inner priestess.

Native to Minoa and the island of Crete, cypress brings powerful balance, peace, trust, comfort, healing, and protection. Its warm and spicy fragrance connects the human spirit with the deepest wisdom of the universe, and also aids in travel between the physical world and the spiritual world. The Cretans built statues of their goddesses with cypress. It was considered a sacred celtic tree and has been used for maypoles. Legends tell us Jupiter’s scepter and Cupid’s arrows are made with cypress.

The Greeks believed cypress trees stood between the barrier of the Underworld and Earth. Cypress honors Pluto, Persephone, and Underworld deities, who represent our capacity to transform, to find peace in death and rebirth, and to embrace our shadow along with our light.  Cypress essential oil is used to bring acceptance, awareness, and comfort, especially during major life changes, such as death and the grieving associated with loss.The calming, strengthening, and grounding properties of cypress teach us to be aware of the limitations of our form, and lives, with graceful ease. This oil can help us reconnect with past life memories and departed loved ones, reminding us that death is never a permanent ending, when viewed from a more comprehensive perspective.


Thyme is native to Crete, and its magical use is deeply rooted in history. This oil has long been used to perfume temple spaces and anoint the body, and is known by many as a source of bravery, release, forgiveness, and purification. Thyme is symbolically and energetically powerful. The name “thyme” is derived from a combination of the Greek word thumos and the Latin word fumus, which both mean “smoke”. Smoke is anciently synonymous with thyme because it was used in sacrificial rituals for its fragrant odor.  Smudging with dried thyme is the origin of fumigation.

To the Greeks, thumos, the herb we call thyme, also designated sacrifice and courage. The plant itself was an emblem of bravery – a gift for soldiers going into battle. Thyme oil has long been used to perfume temple spaces and anoint the body. The use of thyme has been classically associated with style and grace. Ladies of the middle-ages would often embroider a scarf with a bee hovering over a spray of thyme as a token of both affection and protection to the chivalric knight of their fancy.  Legend has it that thyme would protect you from poison if consumed prior to, or after a meal. It was even common knowledge to ancient Greeks, that warm bath water infused with Thyme would stop the effects of poison. For centuries, people have used Thyme in love potions, and believe that faeries live where wild thyme grows.

In Minoa, wild poppies were often used in ritual work and placed on altars as offerings to the Divine. Poppies were known as the magical plant, and were used in many Minoan spiritual work and ceremonies. Minoan artifacts include a clay figure of the “Poppy Goddess” with her head adorned with poppies. Poppies have a long history of magical use for prosperity, fertility, and love. Poppies are associated with sedation, sleeping, altered states of consciousness, and imagination.

In Greek mythology, Demeter ate poppies to ease her grief and suffering over the loss of her daughter, Persephone – who, at the time, was picking poppies when Hades abducted her.The components of the poppy flower are used in modern medicine today. Poppies, plant name papaveraceae, are herbaceous, colorful plants. Wild poppies, such as the Opium poppy, are used as a source of narcotic and analgesic drugs such as morphine, heroin, and codeine. The oil in poppy is also used in a variety of cooking oils, salad dressings, and even cosmetic products.

Safflower is native to Crete, and this flower, which grew wild across the land, was widely used in trade. Safflower’s planetary associations are the Sun and Mars, as it stirs the blood and activates passion. It’s been used throughout ages for protection, attraction, divination, and psychic development. Safflower extract was also used to color fabric, textiles, and cosmetics. Ancient Greeks used to use the dye from its petals to enhance their beauty. Women and men would use saffron as a means to attract males. Since it carries the dynamic energy of Mars, safflower enhances the powers of fiery seduction.

Safflower, a thistle-like plant, used to benefit a variety of heart conditions and physical ailments such as inflammation, diabetes, obesity, and problems with menstruation. Safflower oil, extracted from the seeds of the plant, has a huge advantage in boosting physical appearance as it strengthens hair follicles for more lustrous hair, and prevents skin from breaking out. Safflower is also known to ignite passion, boost the immune system, induce sweat, and reduce fever.