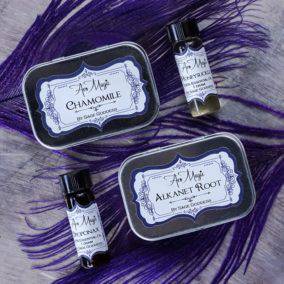 Welcome to a new month of AroMagic! I am so excited to continue this journey deeper into the world of aromatherapy using herbs and oils with you. No matter if you’re brand new to aromatherapy or knowledgeable and experienced, this class is a place for all to take their knowledge deeper. This month, we will be focusing on herbs and oils for success and spiritual development across all planes (physical, mental, spiritual, auric), which you received wonderful examples of in your AroMagic kits – honeysuckle, opoponax, chamomile, and alkanet root.

Honeysuckle, also known as lonicera, is a form of arching shrub or twining vine that comes from the Caprifoliaceae family. Honeysuckle is an herb that promotes visionary abilities, and in fact the leaves of the plant can be rubbed on the forehead to strengthen the Third Eye Chakra. The name honeysuckle was inspired by the edible and sweet nectar which can literally be sucked from its flowers. It is typically found in several regions throughout the Northern Hemisphere, including China, India, and throughout Europe and North America. 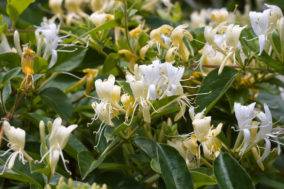 A remarkable aphrodisiac, this oil has been known to inspire very intense and lucid sex dreams, as well as an overall sense of well-being and peacefulness. Its pure aroma helps regulate emotions, and it is especially beneficial for those who are recovering from painful situations such as heartbreak, death, or divorce. Just a few drops of oil into your favorite diffuser will also provide precious mental clarity, empower your innate psychic abilities and powerfully amplify your intuition.

Honeysuckle is a natural antibacterial. Honeysuckle can boost the immune system and helps fight respiratory infections, colds, flus, and pneumonia. Honeysuckle oil is also known to reduce the risk of infections including urinary disorders, intestinal inflammation and dysentery.

When used in ritual magic, honeysuckle can be used to help attract love, luck and wealth, as well as provide protection from negative energies. Also, adding a few drops of oil to a cup of water with white vinegar will make a cleaning agent that will safely and effectively clean and disinfect your space while keeping the vibrations high. The bark of the plant can also be burned as a protective incense.

Opoponax is a natural oleo-gum resin much like myrrh or frankincense. The name itself comes from a variety of different sources including the Anglo-Norman ‘opoponac’ and the Latin ‘opoponax’. Opoponax has a long history as a sacred oil since Biblical times. When used in meditation and ritual, it will bring massive spiritual revelation. Be ready for your deepest truths to emerge to the surface of your conscious being when working with opoponax. Remember, the more clarity you have, the more success you will invoke with your manifestation work.

Opoponax extraction is done by making incisions in the tree bark. A thick gum seeps out of these incisions which then solidifies into brown lumps that are later steam distilled. While similar in production and aroma to sweet myrrh, opoponax oil tends to be lighter and sweeter than myrrh. 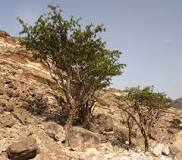 Opoponax has a rich, balsamic aroma that makes it a highly desired ingredient in perfumery and incense making. It possesses various medicinal properties as an antispasmodic and deobstruent, and also serves as a concentration aid.

Opoponax essential oil is considered a highly spiritual oil. It is best used in divination and ritual work to encourage receptivity to occult knowledge. This oil works to create a state of being which is conducive to the revelation of hidden knowledge, and for exploring the hidden depths of your subconscious. An ideal method for incorporating opoponax oil into your spiritual or divinatory work is to diffuse it from an oil diffuser or burner. Or you can wear the oil as a perfume to not only smell divine, but to remain receptive to your guides as you go about your day.

Chamomile is the name used for various daisy-like plants from the Asteraceae family which are commonly used to make herb infusions that possess a wide range of medicinal properties. Chamomile also brings energetic clearing and a wide range of magical benefits. Chamomile’s medicinal and magical properties come from its daisy-like flowers, which contain bisabolol, bisabolol oxides A and B, and matricin. If you are having difficulties expressing yourself, chamomile will strengthen your Throat Chakra and empower your voice.

The name itself has a long history as it is derived from the French, which has its roots in Latin, and which ultimately is rooted in the Greek ‘khamaimelon’, meaning “earth apple.” There are various chamomile plants in cultivation and most are so distinct, they require unique conditions to grow. Roman chamomile, for example, grows close to the ground and has smallish, bitter flowers. On the other hand, German chamomile is known for its sweetness. 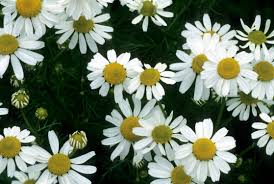 Chamomile primarily works its magic in love and money rituals. Carrying its flowers in your purse or wallet will attract abundance, and anointing yourself in its oil will increase your attractivity. You can also create an infusion to bring protection to the doorways and windows of your home or sacred space. Placing chamomile flowers throughout your space will also protect you from spells cast against you.

Chamomile has been used as folk medicine for centuries, primarily in tea. It is effective as a mild sleep aid, and can be used to treat fevers, colds, stomach ailments, and as an anti-inflammatory. Chamomile can also be applied topically. Scientific research has confirmed many of the traditionally accepted anti-peptic, antispasmodic, antipyretic, antibacterial, antifungal, and anti-allergenic properties of the plant.

Further scientific research has proven that chamomile also has anti-inflammatory, muscle relaxant, and sedative properties as well. These are long held folk beliefs that have finally been validated by extensive scientific research.

Alkanet root, or dyer’s alkanet, is an herb which comes from the borage family. It is known to bring good luck in business, and it is greatly valued for its roots which are used as a commercial red dye. Although the plant produces bright blue flowers, it is the roots of the plant which have been used as a dye since ancient times. Its name comes from the Arabic ‘alhinna’ or ‘henna’ which itself has been transliterated as alkanet.

The properties of alkanet root 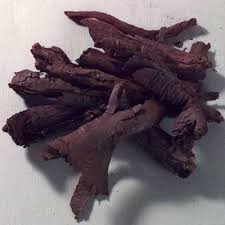 You can burn alkanet root as an incense to bring protection from those who wish you harm, particularly when it comes to money matters. You can also sprinkle the root on your manifestation altars or abundance candles to boost your money magic. Alkanet root also has several medicinal properties. It is most commonly used in folk medicine as an effective expectorant to bring up phlegm. It can be applied topically as an emollient to help soften and soothe the skin and to treat all kinds of cuts, bruises, and phlebitis.

An herbal tea made from alkanet root is still employed in folk medicine to treat a number of conditions, including symptoms of depression and melancholia. The tea can be used to provide relief from the symptoms of a persistent cough, to promote perspiration, and to break a prolonged fever.

Heliotropes comprise over 250 species of flowering plants in the borage family, boraginaceae. The name itself is derived from the Greek ‘Helios’ which means sun and ‘trepein’ which means to turn. Also known as ‘turnsole’, this plant literally turns its flowers and leaves in the direction of the sun as the day goes on. Once night returns, it reorients itself to face the direction of the east to await the new sunrise. It shouldn’t be a surprise that heliotrope is associated with the sun, and can be used in rituals to tap into its masculine energies. 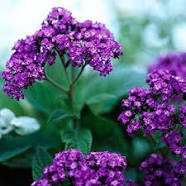 It is said that this plant can be placed under your pillow to bring prophetic dreams, and the oil itself can be used to help facilitate divination and clairvoyance. Legends say that heliotrope also aids with exorcism and according to folk traditions, filling a small horn with heliotrope brings invisibility.

Heliotropes are greatly prized for their wonderful aroma which is often used in perfume making, but this plant also has medicinal uses. A tincture can be made using the whole plant to treat clergyman’s sore throat and uterine displacement.

Burdock is a genus of biennial plants that comes from the Asteracea family. They typically have dark green leaves as well as taproots that can be eaten. The plant is known primarily as a protector, and as it is intimately associated with the planet Venus, it can be incorporated into love and attraction magic.

The plant was originally cultivated for medicinal purposes by the Chinese, although it has more recently become a sought-after ingredient in modern Japanese cuisine due to its mild flavor and high fiber, mineral, and vitamin content. The name ‘arctium’ comes from the Greek word for bear or ‘arktos’ and the species name ‘lappa’ is from the Latin ‘lappare’ which means to seize. 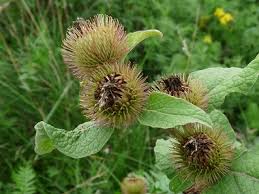 Burdock can be used in ritual and worn as an amulet to bring protection from negativity. You can also incorporate it into your baths or burn it as incense to cloak yourself in its protective embrace. Some like to carve figurines from burdock, let them dry out, and then place them wherever they desire energetic protection.

Burdock is regarded as an all purpose plant and has been cultivated by humans for thousands of years throughout Asia and Europe. It has been an integral part of traditional Chinese medicine for centuries. It is traditionally used as a blood purifier, diuretic, and as a topical remedy to treat acne, eczema, and psoriasis. Extracts can also be prepared to alleviate sore throats and colds.

Change is inevitable. We’re constantly growing and evolving, and it’s not always pleasant. Life hands us unexpected challenges all the time…

Thanksgiving is almost here! What does it look like for you this year? Are your loved ones nearby? Will you…

Have you ever had a “gut feeling” about something – an intuitive instinct that surpassed logic or reason, but just…

Close your eyes and remember the last time that you set an intention. Did you feel doubtful that your wish…