The Fool’s journey continues, and now we observe as he enjoys the serene calm he has tapped into. What effects could possibly spoil his newfound harmony and joy? Can it last? He must remember not to get trapped in the illusion of constant bliss. He must beware of allowing his emotions to rule. The cards that symbolize this precipitous state between illusion and reality are cards 18 and 19 of the Major Arcana: The Moon and The Sun. 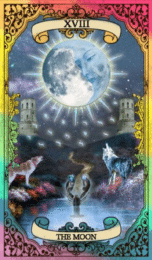 The Moon is a card of deep imagination and illusion. The moon herself is one of humanity’s oldest symbols representing the Divine Feminine and the Cosmic Mother, and with card XVIII of the Major Arcana we explore the deep, watery depths of La Luna’s mysteries. As The Fool basks in his newfound peace, serenity, and bliss, he is susceptible to the illusions of The Moon. His bliss is a fleeting state of emotion, and it has not yet been subject to any mental clarity or reason. He floats in an almost serene delusion that his bliss will last forever. Much like us when we trick ourselves into believing that we can avoid suffering. We may begin to believe that once we reach a state of connected Divine bliss, we will never feel negative emotions again. Then, just as we see in our own realities, in the illuminated darkness of the night The Fool must come face to face with his own fears, insecurities, and anxieties, which pull him back to the realities of the physical world. The Fool is left feeling lost and bewildered as he tries to make sense of the deceptions he has come to believe and is now beginning to see through.

This card is interesting in that it is layered with so much symbolism. First on this card, we see the crescent moon in all her glory, shining brightly on what seems to be unrest below. This is a representation of the human imagination, while also carrying intellectual symbolism in that it represents what is known in the conscious mind, while the road leading out into the distance, between the two towers, represents the unknown and deeper subconscious. The wizened face of La Luna observes all with calm knowing. We see two beasts, one wolf and one dog, which represent the fears of the mind and are often created from imagined threats. On a deeper level of symbolism, these beasts also represent our own inherent animal nature. Then, notice the crustacean crawling up out of the deep to symbolize the deepest, darkest shadows, the nameless and hideous tendencies which we all repress. It appears to try and take form, often as the ego, and to manifest itself as it too seeks a connection with the moon. The crustacean serves as the reminder that even on the spiritual path, the ego and the darkest aspects of shadow have something to offer. The Fool can embrace it or deny it, as can each one of us on our own paths. The Moon is truly a card of perception, which will show us very quickly how we see the world. Does our subconscious view everything as a threat or as an opportunity? Does this card speak of lonely solitude and separation or rather deep intuitive communication? 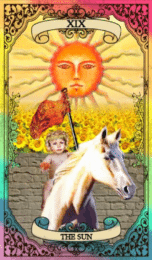 The Sun is a card of clarity, feeling, and understanding. It’s a card of enlightenment. The Fool, in the light of the sun, begins to see through the illusions of the fear and anxiety he was feeling in the illuminated darkness of The Moon. It is here that The Fool taps into the ever flowing river of Divine energy and vitality within. He now approaches the world with ease and assurance, and he feels as though no task is too daunting; that no matter what challenges may arise, he will rise to the occasion. He is the naked babe joyously riding out on horseback. He has tapped into the space of balance, between knowing and feeling, where his emotions and heart are tempered by clear and wise mental clarity. It’s very easy for us to be swayed by and caught up in our emotions, especially our fears, anxieties, and doubts. And while it’s wonderful for us to feel and experience the full range of human emotions, we must be careful to not become a prisoner of them and the illusions that our emotional perceptions can create around us. The Sun represents the Divine light that shines through to help us see things as they are. It is when we can see the reality as it is in any moment that we discover what it means to be truly present. We discover that all we truly ever have is the moment at hand, and we finally understand this on the most inherent and basic level. And all of a sudden, every moment is bathed in the most perfect light as though illuminated by the sun at all times.

The Sun is truly a card of integration and new beginnings. As The Fool experiences this illumination and understanding, he sees and grasps the concept that, as the sun rises, he is reborn each and every morning to a brand new fresh life, much like the innocent babe you see depicted, free from material armor, preconceived notions, judgements, and fear. In the physical reality, the sun is a giver of life and a bringer of light. The sun in all his masculinity illuminates the darkness and sustains the life of all beings on earth in their physical forms. What is darkness but an absence of light? And by the alchemical principles, for any one thing to exist its opposite must also exist, therefore anywhere there is darkness it is also possible for light to enter and exist. This card heralds a message of hope, rebirth, good tidings, and endless possibilities. Notice how large the sun is in comparison to the rest of the card; he’s large and his eyes look straight out at us. The Sun sees all, as does the Divine light of the greater consciousness. Like the naked babe on horseback, carrying his red standard and crowned with flowers, we too can set out from the walled and protective garden of a sensitive ego driven life, free from our defenses, and knowing that just like The Fool we too are Divinely held and reborn with each rising of the sun. 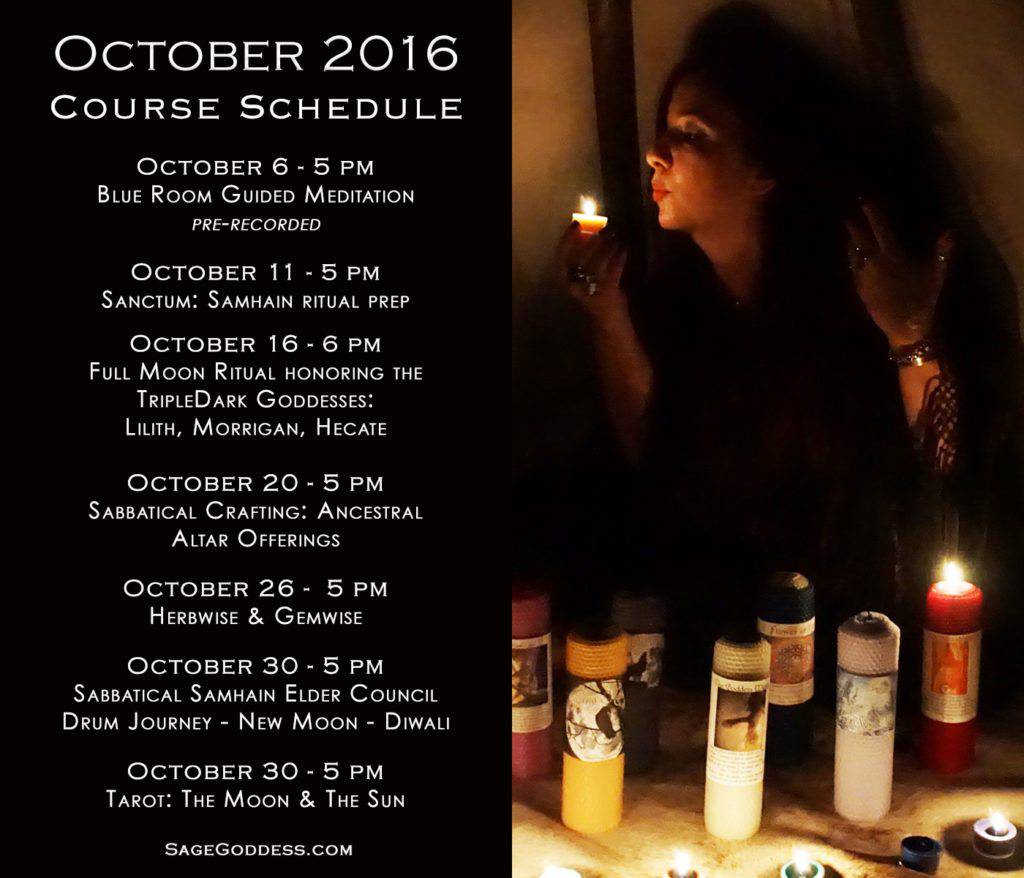