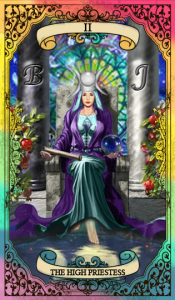 Our cards for February’s class are the two feminine archetypes of the Major Arcana: The High Priestess and The Empress. The High Priestess is Number Two of the Major Arcana, the second person The Fool encounters on his journey. While the Magician represents the active, force of will side to creative expression, The High Priestess represents the passive, mystical side of the creative unconscious. She guards what is unknown, keeping the secrets of the other realms within her vast knowledge. She sees what is unseen, but is contained within all of us; the collective unconscious. The High Priestess is the female counterpart to the Magician. She is shown sitting between two pillars, one black and one white, labeled ‘J’ and ‘B’ for Jachin and Boaz, of the Temple of Solomon. She holds a scroll with the letters “TORA,” which is indicative of the Torah. A crescent moon lies at her feet, a crown sits on her head, and a cross gleams at her chest. A veil embroidered with palm leaves and pomegranates guards the mysteries behind her, which leads us into our next card, The Empress.

This pattern hanging behind the Priestess’ throne is similar to the one that The Empress wears on her dress, which makes sense, because the two are sisters. Whereas The High Priestess invites us into the realms of curiosity and speculation on the mysteries of the unconscious, The Empress is the 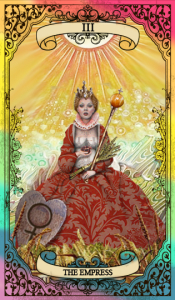 Earth Mother, she who brings miraculous life into the tangible world. She is both Mother Earth and a mother figure to The Fool. She represents abundance – nourishing and nurturing, our pleasure in sensory experiences, and our connection to the natural world. As The High Priestess reigns over the cosmic and the otherworldly, The Empress’ dominion is the Earth. And while the High Priestess governs the ideals of the unconscious, The Empress governs the activity of the subconscious – what we know and believe in our hearts. She embodies the life and growth of the natural world, fertility, and these certain matters of the heart’s knowing. She too sits on a throne, wearing a starry crown and holding a scepter. The scepter symbolizes her sheer power, her crown (with its twelve stars) represents the months of the year, and her throne (in the middle of a rolling green field of grain) represents her connection to the vital life that stems from the Earth to nourish us.

I hope you enjoyed our first class, and I look forward to chatting with each of you in our Facebook group until our next class on February 26th! Continue to explore your Rider-Waite deck, as well as the Tarot Ritual Kits, which you can either subscribe to and receive your tarot kit monthly, or get the February kit here. I can’t wait to see you in class.

Change is inevitable. We’re constantly growing and evolving, and it’s not always pleasant. Life hands us unexpected challenges all the time…

Thanksgiving is almost here! What does it look like for you this year? Are your loved ones nearby? Will you…

Have you ever had a “gut feeling” about something – an intuitive instinct that surpassed logic or reason, but just…

Close your eyes and remember the last time that you set an intention. Did you feel doubtful that your wish…