Our blessed harvest season continues, my beloveds! Last month we delved into our precious connection with the Earth, each other, and the Universe. We celebrated Lammas, the first harvest of the season. This month, we are engaging the mystery by exploring the balance of shadow and light. The Wheel of the Year is turning and we welcome the Second Harvest, the sacred sabbat of Mabon, on September 22nd. Mabon is a traditional celebration of abundance, as we harvest grains, fruits and vegetables, and gather and dry herbs, plants and seeds. The Earth is yielding her bounty, and we delight in the overflowing wealth of resources. 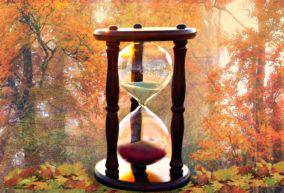 In the Northern Hemisphere, September 22nd is also the Autumnal Equinox, the first day of fall. The March and September equinoxes are the two days of the year when length of day and night are equal. From spring to the last day of summer, the Sun’s power has been dominating, bringing longer and warmer days. At the Autumnal Equinox, day and night forces are equal once again; resting in balance. Going forward, the nights will grow longer, taking their turn ruling the land. We remember that winter is coming, and we respect the impending darkness. We equally give thanks to the Sun and its life-sustaining vitality. We honor the balance of light and dark.

Mabon is a time for us to pause in this momentary balance, on the precipice of the tipping point into the cold winter season. Before we plunge into the coming shadows of Samhain, the Final Harvest, let us rest here and be present. Let us express gratitude for the growth in our lives that has come to fruition, now available for distribution and appropriation over time. Harvest is reaching completion. The fields will soon be barren, and we accept the cycle of life; that growth will once again go dormant. We prepare for the season of repose and reflection, mourning the departure of the Sun God, who is symbolically journeying towards the land of winter, for his death and rebirth.

Rich red, orange, maroon, brown, and gold color these days. Traditionally, we make and drink wine, and enjoy delicious apples, pomegranates, corn, grains, squash, nuts, carrots, onions, and other crops of the season. We gaze out across our land and see the space where new crops will grow in the spring, feeling reflective, mindful of the choices we have when planting. We think about the factors that influence what grows in our fields. What worked this year, and what didn’t? What adjustments can we make next year in order to produce stronger, healthier, and more sustainable crops? Turn these questions on yourself, and they become a platform for personal development that the Autumnal Equinox represents. Explore the mysterious, dynamic balance of light and dark within yourself.

This is your moment to choose which path you will walk during the coming months. The “path” you choose may be internal and less visible to others, aligning with the dimmer days to come, as if descending into a dream or period of hibernation, preparing you for future emergence, like the bear from her cave.

Harvest time is always a portal into the future, as well as a mirror of the past. It’s a liminal space of creative potential. And it summons you to walk through the dark forest, using all of your senses to explore, engage, discern, learn, and grow.

September’s Sabbatical Kit is filled with tools intentionally chosen as allies to accompany you in exploration of your depths; your light and dark; consciousness and shadow.

Invoking Demeter and Persephone for Engaging the Mystery

In the beginning, there was Zeus, King of Olympus. Zeus had three sisters: Hera (also his wife, and goddess of marriage and Queen of Olympus) Hestia (goddess of the hearth and sacrificial flame) and Demeter (goddess of agriculture and harvest).

Demeter was a kind and generous goddess loved by the gods, goddesses, and humans alike. Radiant, with golden hair of sunshine, Demeter had one child who she was completely enamoured with – as was everyone else who had the pleasure of being in her presence. Her name was Persephone, and like her mother, she spread light wherever she went.

The day Persephone was abducted was a tragic one. 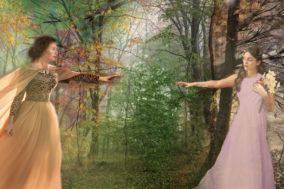 While Hades was traveling through the world, his vision tunneled to an incandescent beauty. Persephone was frolicking through the meadows, and Hades couldn’t help but become completely enchanted. Knowing that Demeter would never let her daughter go, Hades propositioned a deal with Zeus, and to his surprise, was given consent. And it was, that while Persephone was picking flowers, the sky turned dark. Out stormed Hades with his golden chariot, through the clouds, and captured her.

Persephone became depressed in the gloomy Underworld, and refused any luxury that Hades gifted her. She even refused food, knowing that if she had a taste of anything in the Underworld, her soul would be bound to it forever. Every day that Hades entered her quarters was a another day she would refuse him.  But as time went on, she began to see the beauty of the gloom – the lines of Hades’ face didn’t seem so sharp and his eyes were no longer hollow –  and Persephone’s light shone once again, through the depths of the darkness.

Meanwhile, Demeter was stricken with grief as she searched the world for her beloved daughter. As her tears swallowed the land, she invoked a perpetual winter, and barrenness upon the earth, until Persephone was found. Her fury and sadness eventually become one, and Helios (God of the Sun) took pity on the goddess, exposing Zeus’ plan with Hades. Her anger rose again as she took an oath in front of all the gods and goddesses, threatening the life of every human until her daughter was returned to her. But as Zeus sent Hermes to bring Persephone home, she had already eaten six pomegranate seeds from the Underworld, committing her soul to Hades forever. Though it had already been done, through his love, Hades sacrificed Persephone to her mother for half of the year, as long as she returned and ruled the Underworld as his Queen for the remainder of the year.

Persephone is now a symbol of joy, freedom, life, and every flourishing seed. She is also the matriarch of integration and a powerful role model of what it means to embody your full self, light and shadow united. Just as she emerges from the darkness and dances in the light, so do we. When Persephone returns to Hades, we acknowledge autumn and harvest; the growth ebbing, dying off, and returning into the Earth. As we prepare for the descent into fall and winter, let us plant our seeds with intention, seeds that will bloom, come spring.