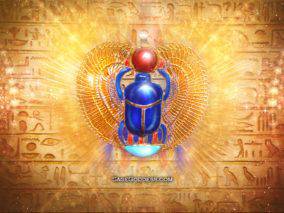 The Magic of Egypt
Part I 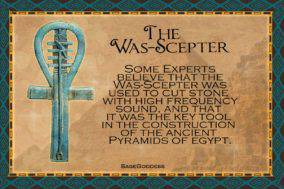 An early visual representation of power in the hands of the gods and goddess is a canine headed scepter with a pronged base. Its earliest depictions of what is called the was-scepter occurs in 3150 BCE in Egyptian art. While later variations of the scepter may be a reflection of Anubis, the jackal-headed god of the Underworld, earlier scepters are topped with dogs, foxes, and an unknown, evidently gentle animal whose ears terminate in a feather. Some theorists believe the was-scepter to be a tuning fork used in the Opening of the Mouth Ceremony.

The djed column is perhaps the oldest symbol of Osiris to appear in Egyptian literature. Later sources suggest the column represents Osiris’ backbone. The djed is a column with a broad base that narrows as it rises, crossed by four parallel lines. The figure of the column denotes stability, and to stand in presence of the revered God of Resurrection and Eternal Life.The Djed appears on the bottom of sarcophagi to help the soul of the dead stand and walk in the afterlife. 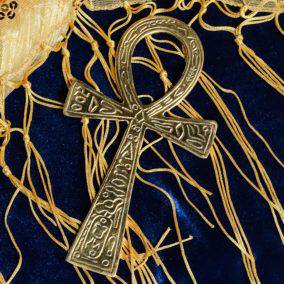 The origins of the ankh are obscure, though its meaning is clear: life. The ankh is a symbol carried in the hands of many Egyptian gods and goddess. It is shown being offered to the mummified dead’s lips, as a symbol of the breath of life during the Opening of the Mouth Ceremony. The ankh is a cross with a looped top, also symbolizing: eternal life, the rising sun, masculine and feminine duality, and the three-fold cosmology of the heavens, earth, and underworld. The essence of these concepts are embodied in the ankh’s key-like shape, and in carrying the ankh, one held the secrets of existence.

The Sensen, the Lotus Flower

The sesen, the lotus flower, appears frequently in Egyptian art. It symbolizes life, creation, death, rebirth, and, especially, the sun. The sesen has appeared in Egyptian iconology since the predynastic era, and is one of the most popular symbols in both the new and old kingdom. The lotus flower closes in the evening, and sinks below the surface of the water, only to reappear at daybreak, opening with the sun. In its parallel relationship to the sun, the lotus is therefore associated with life itself. 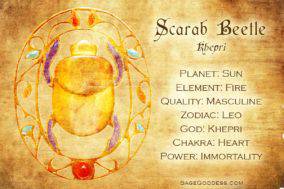 To the ancient Egyptians, the heart, known as the ib, was the seat of wisdom, memory, and intellect. Due to its links with the personality and character of an individual, the heart was considered the most important of all of the internal organs. The heart revealed a person’s true character, even after death. Therefore, only the heart was left intact within a mummified body. In Egyptian religion, the heart was the key to the afterlife. It survived death in the Underworld, where it could give evidence for, or against, its possessor. Spell 30 from the Book of Coming Forth by Day was often inscribed on heart scarabs that were placed within the deceased to appeal to the heart to not testify against the deceased to Anubis, the Keeper of Balance. The heart scarab contained special spells to protect and hide evidence of sins in the hopes of protecting the dead from damnation. The charmed scarab could gift the power of word play to the dead by adding to or taking away power of specific words.

Stones for Immortality, love and protection

Green chert is healing on all levels. It brings the energy of healing to the forefront of therapeutic sessions, enhancing the efficacy of whatever modality is being used. In a healing space, green chert amplifies the potential healing energy in other stones. Green chert is a gemstone of stability. It fortifies past life recall abilities, remembering, and finding lost items.  Chert has been used by indigenous Americans since prehistoric times. High quality chert is a favored material of Native American flint-knappers to this day. Though arrowheads, axes, and knives can be crafted with glass, obsidian, or agate, chert is some of the hardest and sharpest rock known to man. Northeastern Native Americans also use green chert in their medicine wheels to explore the dynamics of personal relationships as representation of tribal interconnectivity as a whole. It acts as a dowsing medium, providing immediate insight and information transference relevant to a situation at hand and many ceremonial tools were carved from it. Green chert has been used to ease the grips of chemical dependency,and  to soothe allergic responses towards foods and pollens.

Sunstone energy is shining brilliance. It fiery essence is clean, pure and clear. It energizes and brightens the radiance of the entire chakra column. Sunstone is crisp, fresh, and has this bounding spunkiness to it; s. Sunstone dissipates fearfulness with its bright, inviting presence, begets independence and spawns originality. . It will increase your vitality, it will bring happiness to blossom, and it will increase your overall good luck. And who doesn’t want that?

Carnelian, a form of sard, has been used since the early neolithic era, more than

10,000 years ago. Ancient Egyptians employed carnelian in the crafting of the heart scarab, the most important magical totem put in place during the process of embalming. Carnelian has been recovered on the island of Crete from the ancient days of the Minoan civilization, and was used during the height of the Roman empire for items of importance – such as sealing rings for official documentation, because wax does not stick to carnelian. Used as an offering to the Divine, a metaphor for immortality, and as sacred adornment, carnelian is mentioned throughout both the New and the Old Testament of the Bible. To Christian and Jewish faiths, carnelian is synonymous with the blood of sacrifice. Historically beguiling, textual evidence of carnelian may also reference jasper or another red stone, as the root word of carnelian, carne, as suggested of its fleshy red color alone. With that in mind, our ancient predecessors have put carnelian, or a similar red-fleshed stone to use in the treatment of both gallstones and kidney stones. It has been used to ease disorders of deep inner organs and spinal maladies. Widespread in its application, carnelian has been lauded to cure pollen allergies, and to treat the common cold.

The use of lapis lazuli stretches back into prehistory. From Mesopotamia to ancient Egypt, to the far East and North Africa, across Europe and throughout the Andes of South America, lapis’ status as a gem of heavens is clearly recognizable. Its name commonly translates to blue stone, but lapis lazuli is so much more that just a blue stone. Its denotation refers not to its color alone, but to the celestial essence of the great unknown, the abode of the gods. The noble color of divinity gave azure, the root of the word the color blue, its association with the sky. Lapis lazuli is composed of lazurite, pyrite and white calcite, giving the appearance of deep space, glittering stars and nebula, among floating clouds and currents of white. In all cultures across the world that had access to it, lapis has been admired and valued over all other gems.

This is the stone of journeywork, astral travel, and of guidance from the beyond. Since ancient times, tiger’s eye has been used as a talisman against curses, and today, it is still very much respected as a source of protection. This stone grants us the ability to see ahead, alleviates feelings of anxiety, and allows us to walk this realm with a sense of stability and control. Hematite is not only an incredibly powerful grounding stone, it also assists with shadow-work, which would have parrelled the Underworld reality of the ancients. With its strong connection to fire, red jasper is a stone of regeneration. Red jasper brings about a renewal of strength and courage. This stone is very special to indigenous Americans. It is used for travel to the astral realm, for divination, and, of course, protection while engaging in these other-worldly pursuits.