This month I am exploring the creative power of Kundalini, which translates to “coiled one” in Sanskrit. It is a primal and instinctive life force that lies dormant at the base of your root chakra. As the source of feminine power, Kundalini holds the potential of transformation and spiritual enlightenment. This Divine Feminine force waits patiently for the call of the Divine Masculine. When she rises to unite, she awakens new states of consciousness.

Our ritual work this month will be focused on rousing this primal energy from her sleep. As she awakens, uncoiling and weaving her way up opening and igniting the seven chakras, she will liberate our sexuality, creativity, and spirituality.

Through our practice this month we will shed our old skin, releasing all that no longer serves us and everything that impedes our growth. We will summon rebirth and regeneration.

Join me this month and unlock the serpent within. 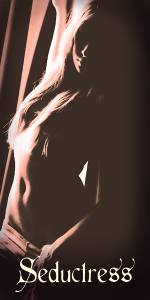 Female archetypes speak to each of us because in them we see our greatest strengths and our largest flaws. The seductress archetype (think Venus and Ishtar from mythology) is one of the most powerful in literature and life. This month I am diving deep into the intoxicating realms of her power. Also known as the Lover, her main desire is intimacy, passion, partnership and commitment. She puts relationships and physical/emotional intimacy above all things, and uses her powers of charm and desirability to attain and satiate her needs. Within each of us is a seductress; join me this month as we tap in to her sensual feminine energy. 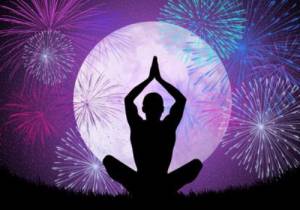 This Saturday is Independence Day here in the U.S. where life, liberty, and the pursuit of happiness are considered inalienable rights.

I’ve been meditating on the concept of freedom, which I define as the pure opportunity to pursue your dreams. Who do you want to be? Where do you want to go?

Use the energy of this week to push through the obstacles that prevent you from living your dream life. Use the energy to raise your vibrations and recharge your mind. Open yourself up to every possibility. 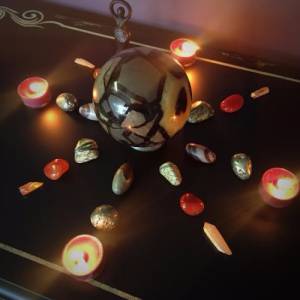 Every month we offer you inspiration and tips to “alter your altar” and bring in fresh energies that are aligned with the seasonal work. This month’s altered altar space honors the Goddess Within: Her ancient wisdom, ancestral power, and dormant creative and sexual energies. We used these stones to grid and placed tealights at the outermost edges: 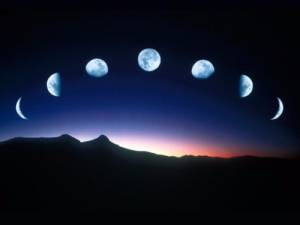 There are two full moons this month, which means twice the moon magic to work with. July is the month for manifesting! 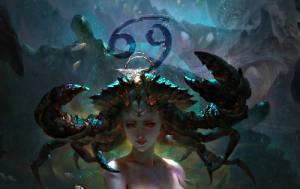 “I honor my feelings.” Cancers are sensitive and emotional, and their moods can swing unpredictably. Ruled by the Moon, those born under the fourth Zodiac sign are susceptible to its waxing and waning energies.

Like the slow-moving Crab, their totem animal, Cancers’ soft and tender nature is protected by a hard outer shell. When feeling insecure or fearful about the big, bad world, Cancers will seek the safety and comfort of their shell. Once inside, it will take a lot coaxing – and lots of love! – to get them out. Cancer is a feminine sign, and holds the Mother energy. They are nurturers, committed to home and family. They cherish memories and keep traditions, both of which are very importance to them.

In relationships, Cancers are loving, passionate, and loyal – though sometimes needy and codependent! These sensitive seafarers are easily hurt and angered. You may not know if you’ve hurt or angered your Cancer. They won’t say anything. You may have gotten “the look” though! The furrowed brow of discontent! Cancers will forgive – eventually – but they won’t forget. No one can hold a grudge like a Cancer.

Those born under this cardinal water sign are complex individuals. Cancers are hardworking and artistic, frugal and generous, serious and childlike. Because of their caring and childlike nature, they make wonderful parents. Children are drawn them. Cancers are deep and mysterious individuals, and they understand life’s little mysteries. There will always be a part of a Cancer that you’ll never know. 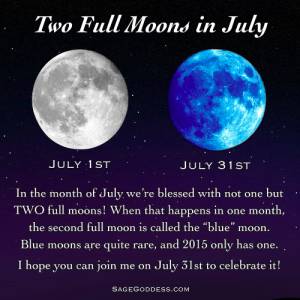 We are honored with two full moons this month! July’s Full Blessing Moon falls on July 1, thus beginning the season of Mother Earth’s blessings and riches. The world around has grown fruitful; now is a time to enjoy! It is a time to relax and focus on our personal meditation. It is around the time of the Blessing Moon, or the Buck Moon as it is known by many Native American tribes, that moose and deer bucks begin to grow new antlers. This is a masculine moon, and a great time to focus on the physical things in your life, rebuilding and repairing your home and spirit.

July’s first full moon is also known as Thunder Moon, because of July’s frequent thunderstorms; it’s also known as the Blessing Moon because nature is blessing us with a bounty of fruits and vegetables right now. In the Southern Hemisphere, where winter is just beginning, July’s full moon is known as Wolf Moon, Old Moon, and Ice Moon.

Most years, there is a second full month within a calendar month. Have you ever heard the phrase, “Once in a Blue Moon”? This speaks to its rarity. The name of this moon may have come from the Old English word, belewe, which meant “to betray.” This “betrayer moon” defies the normal cycle.
It is believed that the Blue Moon holds the knowledge of the Crone, grandmother’s wisdom. Her magic is transformative, breaking down the old and making way for the new. If your spiritual work is centered on beginnings then this is your time! Now is a time for clearer communication with the Divine. The connection with the physical (masculine energy) and the spiritual (feminine energy) is stronger.

Did you know that there can also be two new moons in a month? The second new moon is known as the Black Moon and the next one will occur on Oct. 30, 2016.

July Moon Fact: The rare phenomenon of two blue moons occurring in the same year happens approximately once every 19 years. 1999 was the last time a blue moon appeared twice, in January and March.