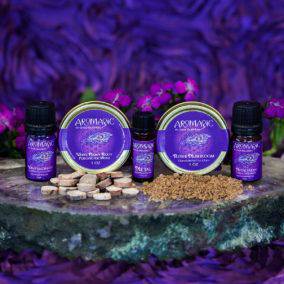 Our June 2018 AroMagic Set: Herbs and Oils for the Five Elements is in the shop now. Find it here.

* For May classes, we are trying out a new format. Classes will be prerecorded, followed by a live Q+A session the following week. In the material below, I have included question prompts to prepare you for those meetings. I would love to hear from you! Please direct your questions, comments, and/or general feedback to our AroMagic group page!

The Magic of Maya 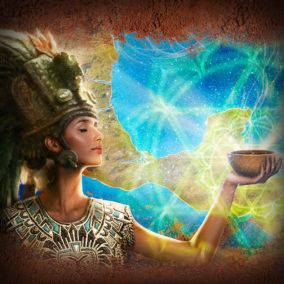 Ancient Mayans were a peaceful and prosperous civilization that commonly practiced rituals of renewal. Ancient Mayans believed in the cycle of life, ever-maintaining the balance of Divine energy. Each one of these herbs and oils was used in rituals native to their culture. More specifically, each was used as a traditional offering. Maya reached abundance through balance – not just in the physical realm, but spiritual as well. Their offerings, such as Tobacco, were powerful because they were reciprocal gifts. When the gods heard them acknowledging their blessings through the soothing smoke of Tobacco, or the bright burn of their Copal resin, they were rewarded. In their striving for balance, the Maya expressed gratitude for all they were given, before and after ritual. Similar to the Mayans, we aim to invoke this balance into our lives by sacrificing what is no longer serving us. We release attachments to make room for the new while honoring and expressing gratitude for the blessings that have already been given.

Tobacco was the most sacred herb in the Mayan culture. Evidence of this substance has been found in runes, and jars dedicated entirely to tobacco have been discovered. The use of tobacco was part of ritual work, as the strength of it led to hallucinations that were said to bring prophetic visions from the gods. Tobacco has many protective qualities and is known to promote peace, confidence, and personal strength.

Tobacco was the most important plant used for ritual during the ancient Maya civilization – it was the initiation for every ceremony because it allowed the living to engage with their ancestors in a magical way. Tobacco was a reciprocal gift – its sacred smoke carried messages, intentions, wishes, and prayers up to spirit. In turn, the tobacco smoke ascended to the heavens, permeating the spirits and gods, soothing, honoring, and satisfying them. Tobacco was deified by the Maya, as it was seen as a gift from God. It was also used in vision-questing – to encounter the depths of the soul, and discover the lower realms where we find healing, wisdom, and integration.

Tobacco healed a variety of physical ailments. Maya would chew up tobacco leaves for insect and snake bites, and toothaches. Chewing the tobacco leaves also helped cure the flu and prevent viruses. Tobacco smoke was used as an anti-inflammatory and a treatment for earaches. In fact, there were only a few complaints that did not respond to tobacco. Tobacco was also used in divination for medical diagnosis, allowing Spirit to guide the smoke to the pain.

Allspice was always incorporated in ancient Mayan ceremonies because it is a key ingredient in traditional Mayan cacao recipes. Often used for embalming, ancient Mayans would cover the deceased’s body with the leaves of allspice. Allspice was also used in Mayan prosperity rituals, as it attracts money and luck when burned. The dried berries of allspice was used as an offering to the gods to draw money and luck in all future prospects, as well as to promote healing and good health. When the allspice tree is cut, there is a strong resemblance to the K’an cross through the branches, fruit, and leaves of the tree. The K’an cross is a symbol used throughout most ancient Mayan inscriptions and imagery.

Allspice raises your vibration because it works on higher planes. As an herb of Mars, allspice provides you with strength against aggression, helping you make positive changes in your life. Allspice has many magical uses – it provides protection, courage, and determination. Allspice has a large effect on the mind, ensuring success by enhancing creativity and providing inspiration and vision. The most important benefit of allspice, however, is its abundant healing and purifying magic. It attracts good health, magnifies intentions of other herbs when mixed, and purifies the soul. The ancient Maya would draw baths with allspice to heal the body inside out.

Copal resin is considered “blood of trees”. It was (and still is) the most sacred resin used for rituals in the Mayan and Aztec cultures. The Mayans would burn copal resin as an offering to the gods, as it purifies and protects against the evil eye and demons of disease. Copal resin is also used for healing, love, divination, and medicine for various ailments. Copal resin is so versatile, it is also used as a binder for pigments on Mayan murals. The Aztecs used it as makeup, adhesive for masks, and in dentistry where copal was mixed with calcium phosphate to affix precious stones to teeth.

Copal resin is also known as young amber – it carries all the light, uplifting, and bright energy of youth with the healing and purifying properties of amber with a rejuvenating boost. Copal cleanses and brings vitality to the spirit. Ancient Mayans would use copal in purification, banishment, divination, love, and other spiritual ceremonies. They burned its resin on top of pyramids as an offering to their gods. Traces of copal resin have been discovered in burial grounds of Mayan ruins.

Amaranth was a sacred plant to the ancient Mayans, integral for bathing newborn babies in its healing properties. They believed that amaranth was the flower of immortality and that its seeds provided great physical and spiritual strength. Amaranth seeds were also a key part of sacrificial ritual offerings to the gods in both ancient Mayan and Aztec civilizations – they believed the plant held extraordinary supernatural powers. Amaranth is said to heal the broken heart and spirit, and provide protection and invisibility.

Amaranth was one of the most magical grains of Mesoamerica. A crown of amaranth flowers in said to heal the body from illness, and when worn against the chest would act as armor – breastplate. Those who choose to invoke the dead and meddle in the realm of immortality would concoct a ritual drink with amaranth. When the Spanish conquered the Aztecs, they eliminated all amaranth because it provided them with divine strength, invisibility, and protection. Now, in modern times, we use amaranth in our own spiritual practices for divination, protection, and healing.