Welcome to a new month of AroMagic! I am so excited to continue this journey deeper into the world of aromatherapy using herbs and oils with you. No matter if you’re brand new to aromatherapy or knowledgeable and experienced, this class is a place for all to take their knowledge deeper. This month, we will be focusing on herbs and oils for meditation, astral travel, and spiritual protection across all planes (physical, mental, spiritual, auric), which you received wonderful examples of in your AroMagic kits – cypress, orris root, melissa true, and uva ursi. 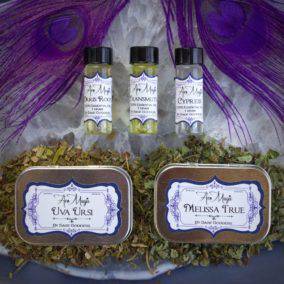 Cypress is an evergreen tree with dark green leaves, small flowers and round gray-brown cones. It originated in the mediterranean and middle east. In Latin, cupressus translates to cypress. Sempervirens means “ever living”. The cypress tree has impressive longevity. Some have been found living up to 1000 years. Many cultures have used the cypress tree. It is known to repel insects and has a strong resistance to decay. Ancient Egyptians used this wood in coffins and in the mummification process. The Greeks built statues of their gods and goddesses with cypress. It was considered a sacred celtic tree and has been used for maypoles. Legends tell us Jupiter’s scepter and Cupid’s arrows are made with cypress.

This wood has been used to connect with other realms for centuries. Ouija boards made with cypress are said to strengthen the communication with spirits because of the wood’s connection to the afterlife. This “tree of transition” has been used in many ways to facilitate and ease passages, especially from life to death. According to historians and sacred tradition, Jesus’ cross was made from the wood of three trees, one of them cypress.

Cypress essential oil is used to bring acceptance, awareness, and comfort, especially during major life changes, such as death and the grieving associated with loss. The Greeks believed cypress trees stood between the barrier of the Underworld and Earth. Cypress honors Pluto, Persephone, and Underworld deities, who represent our capacity to transform, to find peace in death and rebirth, and to embrace our shadow along with our light.

Cypress is also associated with Saturn. Saturn is sometimes depicted as the grim reaper, because endings of earthly experiences fall into his domain. The calming, strengthening, and grounding properties of cypress teach us to be aware of the limitations of our form, and lives, with graceful ease. This oil can help us reconnect with past life memories and departed loved ones, reminding us that death is never a permanent ending, when viewed from a more comprehensive perspective.

As a Root Chakra oil, cypress connects us with the Earth and the life-giving Source. It increases our sense of safety and security, instilling confidence and calm awareness. This oil is an excellent choice as a base in perfumes for protection – it was a favorite fragrance of the sorceress Circe, who used it for shielding and banishing.

When burned, cypress wood is known to increase divination abilities, facilitating deeper use of the mind, which becomes less restricted by the body and boundaries of space and time. The everlasting, immortal nature of the soul is nourished and validated by this “tree of death”. As in all polarities, one concept does not exist without the other. Without death, there is no life; they are one in the same.

Used as a traditional scent since the time of Ancient Greece, orris root essential oil carries a romantic fragrance with undertones of violet. Orris was one of the favorite flowers in medieval English and French gardens. It was the coat of arms of a Frankish king, Clovis I, who claimed his army was saved by the sight of orris growing in a river, signaling their safe crossing.

Orris root essential oil is extracted from the rhizomes (roots) of the iris. The iris is an ancient holy flower, dating back to antiquity. It was named for the Goddess Iris who is associated with the rainbow. Greeks and Romans used orris in many of their perfumes and medicines. While iris flowers bloom in a variety of beautiful colors, the real magic of this plant is in the roots. Through a slow process of oxidation, fragrant compounds are created that release a heavenly, enchanting aroma. It takes a minimum of three years underground for orris root to begin reaching maturity. The root produces a small amount of oil and is very expensive.

Orris is a moon plant, particularly potent when used in divination and dreamwork. It has been used for ages to dig deep into the moon-ruled subconscious or psyche. The watery realms flow from the soul and open our hearts to emotional experiences, intuition, and connection to other dimensions and realities. Orris root is a wonderful tool for astral travel, meditation, and otherworldly exploration.

Connected with the water element and Venus, it is also a love drawing herb, historically used in powder form to blow or sprinkle on a loved one’s clothes or bedding to ensure they return the love. Some say simply carrying the root will help you find a loved one. This essential oil is very effective for sexual attraction, relationships, and romance. Love is considered one of orris’ basic powers, rendering it advantageous for love ritual and intentions of all kinds.

Orris root also supports communication and community, which extends from sentient beings in the immediate environment, to guides, angels, and energies across all existence. The three points of the orris flower symbolize faith, wisdom and valor. Much wisdom can be gained through journeys of the spirit, soul, and altered states of consciousness – where we access the intangible and infinite parts of ourselves and the cosmos. Orris root evokes this type of experience, temporarily freeing us of the illusion of separation.

Melissa true, also known as melissa, and lemon balm, dates back to ancient Ephesus, now known as Turkey, where it was planted near beehives. According to legend, the bees adored this herb above all others. Melissa in Greek translates to “bee”. The life of the bee was the model for Ephesian ceremony. Melissa was sacred to the temple of Goddess Diana (Artemis), and was called the “heart’s delight” in Southern Europe. The honeybee was considered to be a form the human soul took when descending from the Goddess Artemis herself. Melissa is prized for its ability to open us to the love of the Goddess.

Melissa has a subtle lemon flavor and fragrance, used widely in foods, cosmetics, perfumes, liquors, and soft drinks. Fourteenth century French king, Charles V, drank its tea daily to maintain his good health. Seventeenth century Carmelite nuns made their famous Carmelite Water with melissa and several other herbs. This concoction was sold for hundreds of years to treat nervous disorders, mask the stench of unwashed bodies and disease, and as a remedy for most internal and external ailments. William Shakespeare seems to have favored melissa (lemon balm), mentioning it in many of his plays, where it was used to anoint kings, and to ease their sorrow.

This herb is used for prophetic dreaming and helps the user find a meditative center. As a natural memory enhancer and mild sedative, melissa helps the dreamer process and remember their astral travels and projections. Finding and maintaining a calm and receptive state is critical to spiritual and ritual work, and melissa was perfectly created for this purpose. Known to ward off evil, this herb also offers gentle, yet strong spiritual protection.

The list of healing properties for melissa seem limitless. It is well known for countering depression and anxiety, and for calming raging emotions. As an antiviral, antibacterial, and antispasmodic, it may prevent and treat viral and bacterial conditions. Rubbed on the skin, melissa is an effective insect repellent and soothes bites and dermal allergies. Calming a nervous stomach, tonifying the heart, and relieving indigestion of nervous origin, are additional benefits of this amazing herb.

Native to Europe, uva ursi (also called bearberry) is an evergreen shrub that grows in hilly areas. It takes a long time to root, but once it’s established, it becomes a lovely, hearty ground cover that can survive temperatures of -50 degrees fahrenheit. Uva ursi translates to “bear’s grape” in Latin. Bears enjoy eating the red berries produced by this plant. Roman physicians used its astringent leaves to stop bleeding. The Chinese reportedly used uva ursi to treat urinary and kidney infections. It has been used extensively over time in naturopathic/herbal medicine to resolve urinary tract infections, as a diuretic, and for a variety of other health conditions. Due to its potency and specific properties, uva ursi should not be taken in any form unless under the treatment of a doctor or professional herbalist.

Commonly referred to as “kinnikinnick”, uva ursi is a sacred herb to Native Americans, included in pipe-smoking mixtures for religious ceremony. Some tribes use it in the training of shamans, to develop their skills of prophecy and divination. Uva ursi leaves can be smoked to relieve headaches, and relax the spirit, but this type of use is regulated in many areas, due to its narcotic effects.

Uva ursi is especially useful for urinary conditions because it contains certain specific chemicals, primarily hydroquinone and hydroquinone derivatives. Prior to the discovery of modern day antibiotics, uva ursi was in many cases the treatment for bladder infections and continues to be the most useful herb in most of these cases. Its astringent, antiseptic, and antimicrobial properties make it a powerful cleansing and eliminating medicine.

Associated with the Root Chakra, uva ursi helps protect and shield the user, increasing a grounded sense of self-protection. This herb can be carried as a talisman to expel excess fear. Associated with Saturn, it is especially protective of business, fortune, and earned success. In the same way it wipes out harmful physical bacteria attacking the body, it can facilitate energetic cleansing and the removal of blockages obstructing emotional and spiritual communication and flow.

Uva ursi can be smoked or burned as an incense during astral and psychic work to invoke prophecy and access deeper spiritual resources. It brings out the water element, which includes the collective unconscious, ancestral memory, the cosmic womb, and Source itself. Trusted to increase supersensory ability, uva ursi is used in magic, divining rituals, and can be made into herb sachets to strengthen psychic powers. Sprinkling this herb at the base of candles is another powerful way to invoke its bounty of blessings.

Transmute is your free gift this month, a secret essential oil blend to help you transmute darkness to light – a powerful gift during this eclipse month that will make you feel lighter, able to inhale and exhale deeply on a chaotic day.