Welcome to a new month of AroMagic! I am so excited to continue this journey deeper into the world of aromatherapy using herbs and oils with you. No matter if you’re brand new to aromatherapy or knowledgeable and experienced, this class is a place for all to take their knowledge deeper. This month, we will be focusing on herbs and oils for accessing elders, the past, and the Akashic field across all planes (physical, mental, spiritual, auric), which you received wonderful examples of in your AroMagic kits – star anise, styrax, marshmallow root, and calea zacatechichi (Mexican dream herb). 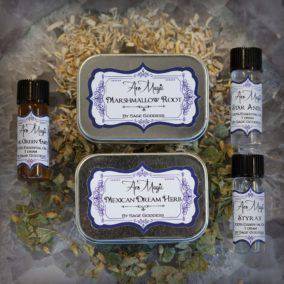 Star anise is a medium-sized evergreen tree native to Northeast Vietnam and Southwest China. It was first introduced to Europe in the 1600s. The star anise spice we are familiar with comes from the star-shaped pericarp (outer layer) of the fruit, harvested just prior to ripening. Star anise is highly aromatic, producing a delightfully fragrant oil. It is popularly used in cooking, beverages, perfumery, soap, toothpaste, and mouthwash. It is one of the five components of Chinese 5 spice mixture. The bark and fruit are also ground into powder and used as incense. Ninety percent of the world’s star anise crop is used to extract shikimic acid, the chemical used to make oseltamivir, sold as “Tamiflu”, an antiviral prescribed to prevent and treat influenza. This is a very practical example of its potent, banishing properties.

Carrying the scent and taste of anise and licorice, the use of star anise is very popular in cooking and liquors. Although they both contain the flavor component anethole, star anise is not the same as anise (aniseed), an unrelated spice. The West now uses star anise as a less expensive substitute for anise in baking and liquor production, such as Sambuca and Absinthe.The properties of star anise go far beyond taste buds and olfactory pleasure. The uniquely sweet scent and flavor have been used for attracting luck, increasing psychic power, and to bring back lost loves. Its name, Illicium, comes from Latin illicio, meaning “entice”. As an herb of the Air and Water elements, star anise is particularly powerful in connecting with, or drawing in, other realms, beings and dimensions.

Star anise essential oil is used to gain insight and psychic awareness, for divination, good fortune, psychic development, power, consecration, and purification. It is used in cleansing waters for ritual purification ceremonies. It facilitates communication and connectivity – between facets and versions of yourself, and with spirits and astral realms. It is said to open the gates to the heavens and to please the gods. Star anise is connected with rites of passage, helping us to align with our soul’s desire and Higher Purpose.

In Chinese medicine, star anise is used as a remedy for rheumatism, low back pain and herniation. Its properties are warming, stimulating, and diuretic. It stimulates the appetite, aids in digestion, and relieves flatulence and indigestion.

A powerful aid in divination, star anise essential oil can be added to your ritual bath or to anoint candles. It is used as a magical perfume or anointing oil to protect against negative energy and to attract good spirits. Referred to as the “spiritual spice”, it adds an otherworldly, divine element to anything it touches.

Styrax is known as the resinous elixir of the gods, derived from the resin of the styrax benzoin tree. The styrax benzoin tree is native to Asia, and comes from the island countries of Java, Sumatra, and Thailand. Styrax has been used aromatically and medicinally for thousands of years. It is one of the oldest traditional ingredients of incense, carrying a warm, woodsy, creamy, sweet vanilla-like aroma.

Queen Elizabeth I used dry perfumes made with styrax (benzoin), and the first use of this divine fragrance in England is traced back to the 15th and 16th centuries. It has been used medicinally in the Far East for thousands of years, as well as in Ayurvedic treatments. It is burned in Buddhist and Hindu temples to elevate spiritual awareness and increase receptiveness for divine inspiration. It is also a popular incense in Orthodox Christian churches and in the Islamic world.

Styrax’ history as an effective fumigator (incense) is extensive. It is a trusted agent for driving away “bad air”, disease, and pests. It truly does possess repellent properties against insects such as mosquitoes and roaches. It also contains anti-inflammatory compounds which help relieve swelling associated with cough, bronchitis, and emphysema. Its anti-inflammatory properties also aid arthritis, rashes and aggravated digestive systems. Historically, styrax is well documented as an antiseptic and disinfectant, used as a topical remedy for skin conditions such as shingles, sunburn, herpes, dry skin, eruptions and healing wounds. It continues to be used worldwide to raise spirits and uplift moods. It stimulates heartbeat and circulation, and regulates the nervous system. For these reasons, it is a wonderful tool to use in creating a celebratory and receptive mood in ceremony and gatherings.

Styrax is associated with the Sun and solar power, potent with healing powers. Like the Sun, it provides illumination, boosts physical energy, and heightens success. It also increases sensuality and promotes communication. Styrax is known for increasing the frequency of fulfillment – supporting us in manifesting more of it. It is an ancient oil of offering, effectively used in rituals that bring peace of mind.

Styrax oil can be used for altar consecration and in ritual preparation to invoke strength, vitality and wisdom. It is a powerful ally for magic, increasing the rate of spells, attracting monetary success, healing, and comfort. It clears negativity, especially in the home. Styrax is used for focus and psychic protection during astral projection and channeling. It awakens the mind for inspiration and helps us reach higher levels of consciousness. It also relaxes us into a state where we are open to new and expanded spiritual experiences.

Marshmallow root, also known as althaea, is a psychoactive herb from Europe, brought to America as a medicinal plant. It is a hearty shrub with bold heart-shaped leaves and delicate pale pink and white flowers. The flowers and leaves are edible, used as an addition to salads. In Egypt, a delectable treat was made using marshmallow sap and honey. A specific Ancient Roman dish made with marshmallow was considered a delicacy. Today, marshmallows do not contain marshmallow root – we use gelatin instead. Ancient herbal medicines often contained marshmallow root, typically in the form of tea or tonic.

The name althaea, comes from the Greek altho, meaning “to cure” or “healer”. It is used for both medical and spiritual healing, embodying soothing, cleansing, protective, and psychic powers. Marshmallow root is found growing wild in salt marshes and ditches. In Arthurian mythology, it grows in the sacred pools of the various mystical women (such as Lady of the Lake) who appear within them. It has been used for love and fertility spells and is associated with death and rebirth. Offered in sweet parting, it is used in departure rituals to honor the dead.

Marshmallow root is a demulcent, an agent that forms a soothing film (mucilage) over mucous membranes, making it especially effective in relieving inflammation. It is commonly used to soothe respiratory, digestive and urinary tracts. Along with its soothing properties, marshmallow root is cleansing, a particularly potent combination for the gastrointestinal system. Remedies and treatments for irritable bowel syndrome, ulcerative colitis, Crohn’s disease, constipation, bloating, ulcers, and gas often include this herb. It is also effective in alleviating pain and inflammation associated with abscesses, burns, cuts, varicose veins, and oral infections.

In Voodoo practice, marshmallow root is known as a good “spirit-puller”, used to bring good spirits in during ritual. It also offers astral protection and is easily invoked by placing dried leaves under one’s pillow. Marshmallow root is used in ritual and daily practice for divination, harmony, protection, peace, and to connect with beings from other planes. It is an impressive psychic power stimulator, increasing clairvoyance, perception, and vision, heightening the ability to receive clear messages from other realms/dimensions. With its intimate connection with death, marshmallow root helps facilitate the conjuring of benevolent ancestral spirits. Placing marshmallow root on an altar, burning it as incense on charcoal or a candle, or carrying it in a sachet is known to attract good spirits, activate psychic power, and open channels of otherworldly communication.

Calea zacatechichi, or Mexican dream herb, is also referred to as bitter-grass, Mexican calea, dream herb, and “Leaf of God” or thle-pelakano. It is perhaps the most popular herb for those seeking lucid dreaming. Native to Mexico and Central America, calea is a species of flowering plant in the aster family. It has been used in Mexico for centuries as an herbal remedy for dysentery, fever, diarrhea, asthma, and stomachache, in shamanic ritual to divine the future, and as a powerful dream-enhancer. Calea is still used by the Chontal Indians of Mexico to obtain divinitory messages during dreams. Dreams are eminently important in Mesoamerican culture. Chontal Indians believe dreams occur in a suprasensory reality realm, making the conveyance of messages possible and desirous.

Carrying the properties of an oneirogen, calea produces and enhances dream-like states of consciousness. Oneirogen describes a wide array of psychoactive plants and chemicals. Dream-enhancing plants have been used for thousands of years – we use the term oneiromancy to describe the interpretation of dreams for the purpose of foretelling the future.

Calea is a soothing, peaceful, and relaxing herb. Its calming effects combat insomnia and anxiety. It is an excellent sleep aid, promoting deep and refreshing sleep. Going beyond the inducement of sleepiness and rest, calea positively affects the quality of sleep, capable of producing profound rejuvenation. While carrying these calming and tranquil effects, calea is also reported to bring clarity of mind and the ability to recall dream memory. This dream herb is hallucinogenic, and its hallucinogenic effects increase with high dosages.

The dream-like states of consciousness induced by calea, due to its oneirogen properties, are characterized by an immersive dream state similar to REM sleep. Tucking the dried herb under one’s pillow is said to incite divinitory dreams. Smoking the herb or infusing it as a tea are common ways of accessing its medicine. One of most amazing abilities of calea is its generation of dreams that convey strong, meaningful messages. If you are longing to get in touch with yourself, the messages from your guides and elders, and your less conscious memories, wisdom, and motivations, calea is your magical ally.

Green Fairy blend is your free gift this month, an alchemical blend of wormwood and sandalwood, to help you connect with the elementals, who can teach you to see beyond your current reality, into realms free of the illusion of space and time. Fairies are believed to be the masters of all herbal remedies and they love to share their wisdom with us, when we are open-minded and free spirited. We most easily access the fay and ethereal spirits when we dream and play – less encumbered by the stress and tension of human existence.